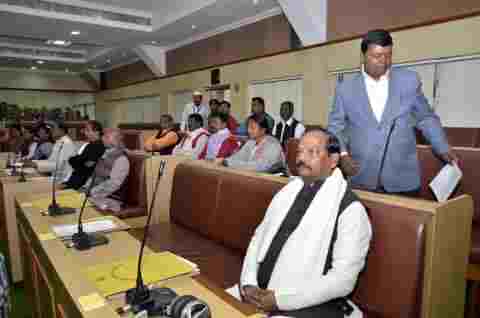 Four Opposition MLAs were placed under suspension in the Jharkhand Assembly on Thursday.

The suspended MLAs were :the JMM’s Shahi Bhushan Samad,Polus Surin,Amit Mahato and the Congress’s Irfan Ansari.They were suspended by the Assembly office till March 31,2017.

They were suspended on recommendation of the Assembly committee on charges of entering the Well of the House and disrupting the proceedings of the Assembly.

The committee was formed after a complaint was filed by the MLA Jitu Charan Ram on November 24,ten days after the Raghubar Das government had ensured that the amendment Bill of the CNT and the SPT Acts was passed by the Assembly without any discussion.

This was protested by these four opposition MLAs.But Ram lodged camplaint against them.The committee was set by the Speaker Dinesh Oraon.The Committee found them guilty.

Reacting to the decision of the Assembly,Surin said,”It is sad that the ruling BJP was misusing the power to suspend us and destroy the democratic process in the state.”