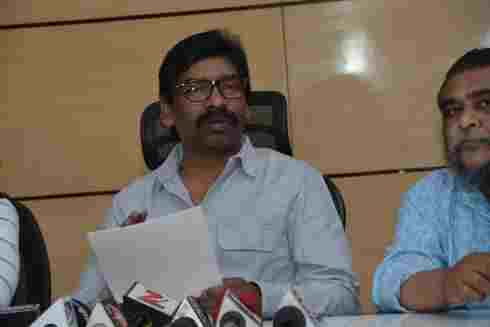 Hemant Soren,JMM leader and leader of the Opposition in Jharkhand,on Wednesday lambasted the Raghubar Das government for organising what it had described as ‘Global Investors’ Sumeet.

“I thank the government for organising it.I am thanking not because the Global Investors’ Summit was a big step to develop Jharkhand.I am thanking it because it has spent crores and crores to invite looters and profit makers,provide security, install CCTVs,build roads,paint electric poles”,said the JMM leader.

He opined that this kind of works can shift focus from many incidents of dacoity,rape and murder,traffic jam and dirt, filth and make some people clap and gain milage.But it is not Global Investors Summit.Instead it is Garib Intimidation Summit”,observed Soren.

“This is the Mahachintan Shibir of Land Grabbers”,he said and asserted that the tribals and locals of Jharkhand are not going to tolerate the BJP government’s clandestine move to uproot them.

Asked what the JMM is planning to do,Soren replied that it will oppose the ‘destruction’ of the people of Jharkhand.However,he does not oppose industrialists and investors.he said:”We are opposing the manner in which this pro -capitalist government was out to grab the poorman’s land”,he said.