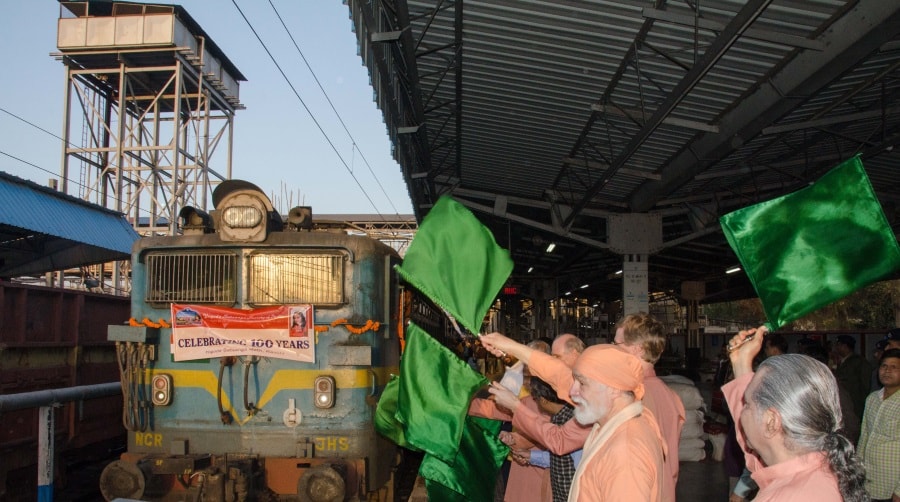 A special train was flagged off by South Eastern Railways at Ranchi Railway station on Tuesday.Packed with devotees of Paramahansa Yogananda,the train will reach Damodar to facilitate them celebrate centenary function of the Yogda Satsang Society at Dikhia near Asansol.As it is,Yogoda Satsanga Society of India was founded by Paramahansa Yogananda Ji in 1917 in Ranchi.On Wednesday,YSS is completing its 100 years. The centenary is being celebrated throughout India, with many spiritual, and charitable activities.

Prime Minister Shri Narendra Modi has already released a postal stamp to commemorate the 100 years. On this occasion,YSS devotees are having 5 days long program in the Ranchi Ashram, and a special train 08641/0862 is deployed  by South-Eastern Railways from Ranchi to Damodar in which around 1500 devotees are visiting Dihika (near Asansol).

Dihika is the place where Yoganandaji started in worldwide mission with seven boys, and later shifted to Ranchi. This special train was flagged off today at 6:15 a.m. at the Ranchi Railway Station by DRM Shri S. K. Aggarwal, Sr. DCM  Niraj Kumar, Swami Vishwanandaji who has come from Los Angeles, USA, and Swami Smarananandaji, GeneraL Secretary of YSS.

On March 22 - the foundation day of YSS, the CM of Jharkhand Shri Raghubar Das will grace the centenary function as a chief guest at Yogoda Math, Ranchi at 5:30 p.m..