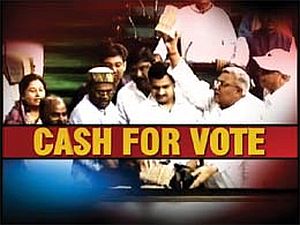 The CBI today raided the premises of MLAs who were accused in the cash for vote scam.

Among the MLAs whose houses and official premises were raided in Ranchi,Hazarbagh,Pakur and Godda are Congress’s two MLAs Rajesh Ranjan and Yogendra Sao,JMM’s Simon Marandi and BJP’s Uma Shankar Akela.

The CNN-IBN TV channel had caught them on camera receiving cash to vote for businessman KD Singh in the rajya sabha by poll in 2010.The raids continued at their premises and details of seizures were awaited.