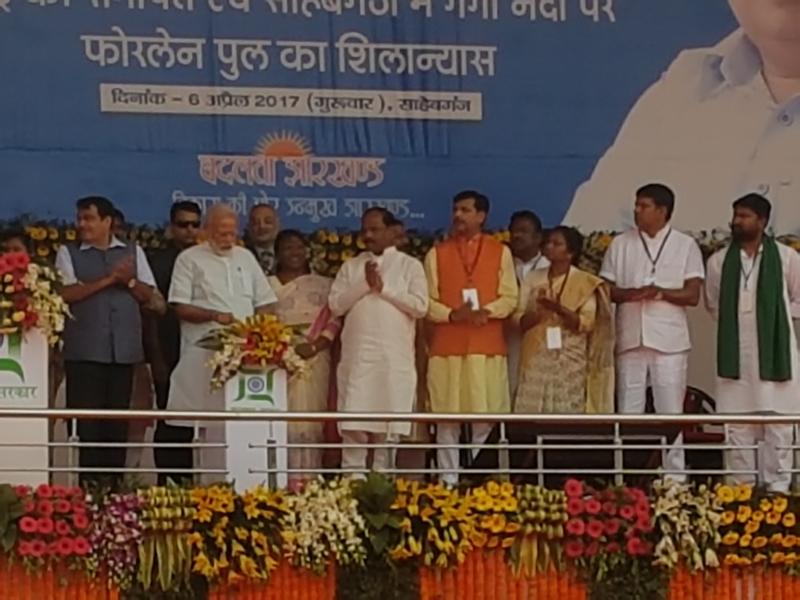 Prime Minister Narendra Modi landed in Sahibganj in Jharkhand  and laid the foundation stone for a Rs 1,955 crore bridge to be constructed over the river Ganga.

After the Manihari-Sahibgunj bridge is constructed in the next three years,it will link Sahebgunj in Jharkhand with Bhagalpur in Bihar and Silliguri in West Bengal.It is considered as a gateway of farmers,businessmen and industrialists of these states.Apart from providing them benefit from it,the bridge is expected to provide employment to hundreds of people in these backward states.

The Prime Minister inaugurated it by pushing the online remote button.In addition,the PM laid foundation stone of the multi-modal terminal under the National Waterway-1.

This National Waterway 1 from Varanasi to Haldia, a distance of 1390 km. NW-1 is being developed under the Jal Marg Vikas Project of the Inland Waterways Authority of India, with the technical and financial assistance of World Bank at an estimated cost of Rs. 5369 crore. The project would enable commercial navigation of vessels with capacity of 1500-2,000 DWT.

The Sahibganj terminal is the second out of three multi-modal terminals to be constructed on NW-1. Earlier in May 2016, IWAI had awarded the contract for the construction of a multi-modal terminal at Varanasi. The third terminal will be constructed at Haldia in West Bengal. The work is expected to commence soon at Haldia. Construction of terminals is essential to facilitate transhipment and movement of bulk cargo on NW-1.

The state of the art terminal at Sahibganj will have a cargo handling capacity of 2.24 Million Tons Per Annum (MTPA) on completion in 2019. The contract for the construction of the terminal has been awarded to M/s L&T Infrastructure Ltd at an estimated cost of Rs 280 crore. The terminal facilities will include berthing space for two vessels, stockyard, conveyor belt system with hoppers, barge loaders, shore protection works, roads, ramps, parking area, and terminal buildings.

A Roll-on Roll-off (Ro-Ro) terminal at Sahibganj is planned to provide critical connectivity with Bihar at Manihari. About 100 trucks have already started using the facility at Sahibganj. The crossing of trucks through Ro-Ro facility would save a lot of time, cost and fuel in road transport.

The construction of the multi-modal terminal at Sahibganj and the overall development of NW-1 will contribute significantly to the creation of business and employment opportunities in Jharkhand, particularly in the rural areas.

Experts say that it will also provide critical last mile connectivity to the hinterland of Jharkhand. The state is richly endowed with mineral resources. The multi-modal terminal at Sahibganj will play an important role in transportation of domestic coal from the local mines in Rajmahal area to various thermal power plants located along NW-1. Other than coal, stone chips, fertilisers, cement and sugar are other commodities expected to be transported through the terminal.

The rail and road corridors in this region are heavily saturated. Hence, the development of NW-1 would provide an alternative, viable, economical, efficient and eco-friendly mode of transport. The waterwaywill act as a catalyst in the socio-economic development of the regions by creating new business and employment opportunities.

Not the least,the PM laid foundation stone of Solar Plants of 90 and 70 Kilo Watt.