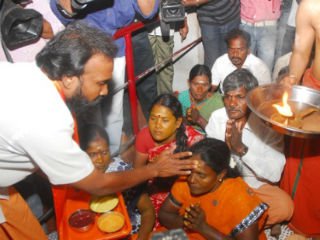 Rashtriya Swayamsevak Sangh  is in the news in Jharkhand with at least 50 families in five tribal-dominated villages were reported to have “returned to Hindu fold” during the past one month.

The move was dubbed as a result of the RSS' 'Ghar Wapsi(Return Home) campaign,Now,the  as part of the RSS's "Free Block from Christianity" campaign,the Ghar Wapsi by almost 50 families had taken place Arki block near Ranchi.

"Culture of tribals was being changed effectively by the Christian Church and its organised groups of priests,educationists and politicians. These families live in villages.They were hijacked by Missionaries",said a senior RSS Pracharak.

In fact,the RSS, the ideological parent of the BJP that is in power in the mineral-rich state, says its Ghar Wapsi campaign is picking momentum in Christian dominated areas where converted Christian Adivasis were returning back to their Hindu religion",RSS Saiyojak Laxman Singh Munda, who is spearheading the campaign

In fact,many Adivasis who were neither Chistian nor Hindus considered themselves as "Sarna"(Natural religion) of their own.The alleged ghar wapsi is expected to continue throughout April,season free from cultivation of land.

However,raise a question as to why they were carrying Ghar Wapsi campaign and pat comes the reply."We don't describe it conversion. We are only bringing our lost brothers and sisters back to their natural religion,” says Munda, who is spearheading the campaign.

“We want a Christianity-free block. The villagers will soon return to their roots.”