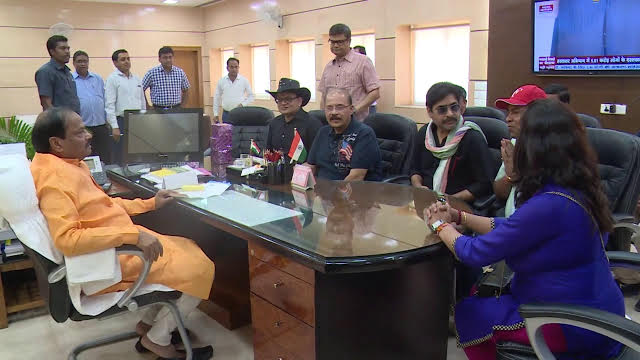 However,the smile appears to have come on his lips when the Team members of a Bollywood film-Ajab Singh Ki Gajab Kahani-landed in Ranchi and met the CM.

After all,they were Bollywood guys.Moreover,the movie- Ajab Singh Ki Gajab Kahani-which had gone on floors this month was out in the backdrop of demonetization and fight against corruption by the ruling BJP led by Prime Minister Narendra Modi in the country and Chief Minister raghubar Das in Jharkhand.

In any case,this new movie is a biographical movie starring IRS Ajay Singh who is a government officer and his mission is to stop illegal activities and corruption. The film was released recently.

Written and Directed by Rishi Mishra, the movie is based on real live events of IRS Ajay Singh, who also worked as the lead actor in the movie. The music for the movie is composed by Sushant Shankar & Tanmay Pahwa.The film was  shot in Jamshedpur, Banaras, and Delhi.

In brief, Ajab Singh Ki Gajab Kahani is the story of Ajay Singh. Ajay Singh, an impoverished kid who grows up to be a civil servant and vows to protect sugar cane farmers in his village who are pushed into poverty by sugar industry owners and local politicians. Ajay Singh reached the position of authority not only fighting his financial situation but also physical challenges. The movie shows this man’s journey as he coped with his diminished hearing ability and compromised vision and still continued on his mission.

The film has a message for Bollywood viewers-watch it and see it as it seeks to depict the grass root reality of an officer who gains the Class 1 job by competing in Union Public Service Commission,aims and acts  to contain corruption despite suffering from  diminished hearing ability and compromised vision.