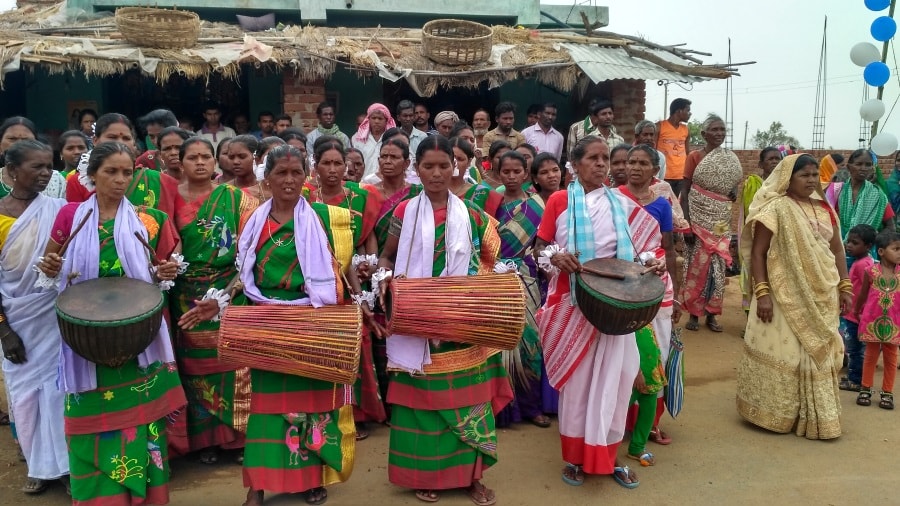 Hundreds of women today played traditional Mandar and walked in the streets of Giridih where its district administration in league with UNICEF celebrated the achievement of open defecation free (ODF) status of 29 villages from three panchayats of Golga,Harila, Chapuwadih and Chotki Kharagdiha in Bengabad block.

The ODF validation in these villages by the committees formed at panchayat and district level has been completed.

The Department of Drinking Water and Sanitation Department,has tried its best to achieve the goal of open defecation free Jharkhand by 2018. Giridih district administration has taken up this challenge and is leading from the front to create open defection free communities with UNICEF technical support.

In the financial year 2015-16, Giridih stood second in the construction of household toilets in the state. Till date 140 villages in the district have been declared open defecation free.

These toilets have been built using SBM funds as well as MNREGA and 14th Finance Commission resources available with panchayats.The success of the SBM in Giridih is a result of community engagement and the regular follow-up and monitoring by village committees which have helped increase the villager’s knowledge about the benefits of sanitation and ensured these toilets are used post construction. Community ownership and participation in the SBM has ensured that over 430 households have been constructed by the community members at their own cost.

The district administration has also focused on the promotion of sanitation and hygiene in schools. Fourteen group hand washing models have been constructed in schools where there were no hand washing facilities with the 14th Finance Commission funds.

Uma Shankar Singh, Deputy Commissioner, Giridih, said, “This year too Giridih is second in the state with a construction of over 42,000 household toilets till date.We will be able to achieve the 60,000 benchmark by end of March 2017. It is a matter of pride that two blocks of Gawan and Bengabad are likely to be declared ODF by March &May 2017 respectively.”