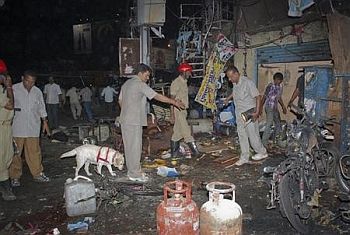 Initial forensic samples from blast sites indicate use of ammonium nitrate, urea and petrol in manufacturing of IEDs fitted in bi cycles. The investigators are probing three specific names as suspected by Hyderabad police.

Among these suspects who allegedly belonged to Indian Mujahideen,is Manzar Alam,a Ranchi based youth.Alam was in the radar of the National Investigative Agency for long.Apart from NIA sleuths,the police had raided his Bariatu based house a number of time,but he remained beyond their reach.

Following a tip off,the police had been scanning the area along Jamshedpur railway station and Ranchi.

In Hyderabad,the scene of two serial blasts that had killed 18 persons,the police was helping NIA on suspected link to a January 18 raid on a Hyderabad lodge from where a guest staying under a false name escaped hours before the raid. The Hyderabad police are treating this as one of the key leads.

The investigators are also looking at similarities with the August 2012 blasts in Pune.