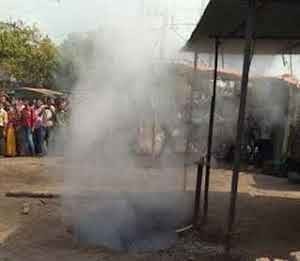 *pic showing fumes coming out from the hole where land caved in.

Today this morning land caved in at Indra Chowk in Jharia, Dhanbad.Its a coal mine area where underground fires have been raging for decades. As a result of the incident, father Bablu Ansari (40) and son Rahim (10) are believed to have been killed.

The land had caved in upto 1500 feet below the surface. The temperature inside was estimated be around whopping 85 degree celsius.

SDO and City SP Anshuman Kumar have reached the spot. JCB machine have been brought in to aid in the resue operations. Scores of people have reached the site. However none of the rescuers were allowed to go deep inside the hole because of underground mine fire and extremely high temperatures.