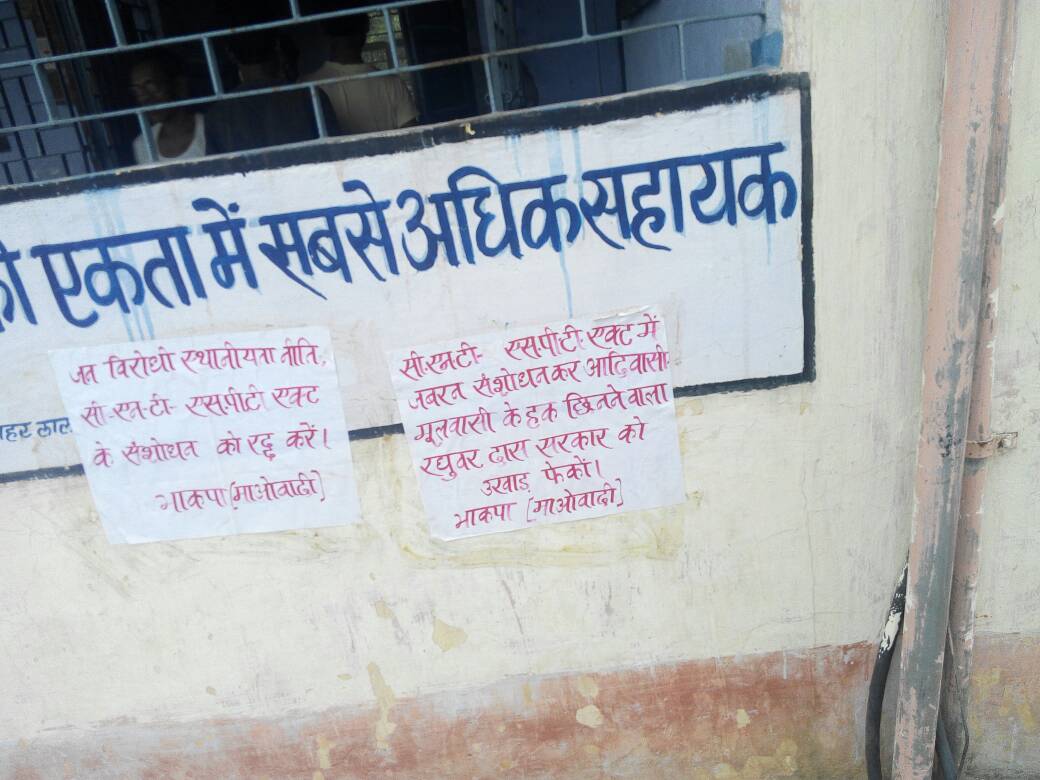 For the first time,Maoists have come out in protest against the amendment of land tenancy law made possible by BJP government led by Chief Minister Raghubar Das.

Last night when they set afire many papers,office and part of a train at Dumri Bihar Railway station,they had put up posters against the amendment of land tenancy law and demanded withdrawal.Several tribal communities had protested against the state government's move.

Even Governor Draupadi Murmu had declined to approve the Bill envisaging amendment in the land tenancy law prevalent in Jharkhand since the pre independence period.However,the Maoist opposition has become public now when the Bill was lying in the office of the Governor for approval.

Incidentally,last year in November,the state assembly amended the core of land tenancy law without any discussion on floor of the Assembly.Soon,protests and police firings replaced pro-government sentiments to the extent that a group of tribals also hurled shoes at Das a few weeks after the amendments.

Birsa Munda, Tilka Manjhi and many other tribal leaders had fought and laid down their lives for these very tribal land rights. Their rebellion forced the British colonial government to formulate tenancy laws to protect tribal lands and rights.

“This is not an amendment but a plan to grab the tribal land and sell it to corporates,” alleges Sanjay Basu Mullick of the Jangal Bachao Andolan (save forest campaign), a non-profit activist organisation. Connect the dots and a chain of events will reveal a conspiracy, he told VilageSquare.in, hinting at the state’s sponsored Momentum Jharkhand mega event organised in February last year to attract industrialists and investors to the state. “The state government repeatedly said in the event that they have a land bank,” he said.

The state government has amended three sections and abolished one sub-section of the Chotanagpur Tenancy Act (CNT), while one section of Santhal Pargana Tenancy Act (SPT) has been amended.

Section 49 (1) has been amended to empower government to transfer tribal land for social welfare projects like hospital, schools,anganwadis (day care centres) and linear projects like pipelines, roads, etc. The cost of the transferred land shall not be less than the compensation fixed under the federal Land Acquisition Act.

Section 71 (A) sub-section (2) that deals with tribal land transfer after compensation has been abolished. In Jharkhand there are around 64,000 cases pending under Schedule V. Schedule Area Regulation (SAR) courts have been set up in the state to deal with such cases.

Sukhdeo Bhagat, a former bureaucrat, points out that tribals are seeking compensation in these 64,000 cases and by abolishing 71(A)(2) these claims are likely to null and void. “These tribal families will lose their land and also their right to justified compensation,” he told VillageSquare.in.

The amendments have been sent to Jharkhand governor Draupadi Murmu for approval.

After a series of tribal uprisings, the government had put Jharkhand under Schedule V of constitution of India. It protects tribal land in 13 districts and three blocks in two other districts of the state.Under CNT and SPT Act tribal land cannot be transferred or sold to non-tribals. It also bars tribal land use from other than agricultural and allied activities. Governor is the custodian of tribal rights mentioned under Schedule V.

Land right activists claim that recent amendments make it easier for land sharks to grab tribal land. Bineet Mundu, a researcher with Bindrai Institute for Research Study and Action (BIRSA) based in Ranchi, points out that last amendment to the CNT and SPT Act was done in 1996. The amendments of 1996, Section 49 of the CNT Act allows land acquisition and transfer in schedule areas for industrial development and mining.

“CNT and SPT already have provisions for industrial development and mining then why weaken it further? It means the government wants to favour land sharks,” Mundu told VillageSquare.in. Katyayan says that there is special provision for land acquisition for atomic and nuclear energy like one in Jadugoda, highways and linear projects.

Land right activists are protesting against the amendments. Even cardinal Telesphore Toppo joined the protests and met Draupadi Murmu, requesting her not to approve the amendments because they are
ant-tribal.

This is not the first time that the CNT and SPT Acts have been amended. CNT Act alone has been amended 26 times. In 2010, the state government during the Arjun Munda regime tried to dilute CNT Act by
waiving off deputy commissioner’s consent for tribal land transfer. The Ranchi high court, while disposing of litigation, reinstated the provision of the approval for land transfer in schedule areas.

Allaying fears and protests, chief minister Raghubar Das in a series of press conferences has countered that the amendments in tenancy laws are going to benefit tribals in the long run. He maintained that tribal families couldn’t use their land for commercial activities despite having large land holdings. “Time has changed and many activities can be carried out on these lands to prosper,” Das said.

Nidhi Khare, secretary personnel department and state government’s spokesperson, in a press conference claimed that amendments have been made after a series of consultations on measures that can uplift
tribal families in the state. “Land use amendment was crucial as tribal families were not legally authorised to open even a small shop on their own land,” she said. She added that amendments would bring a
spate of prosperity in the state.