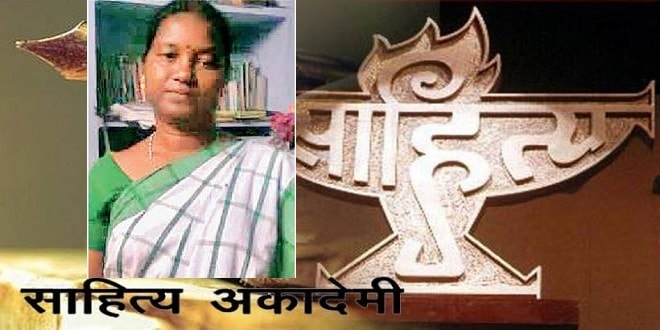 A good news trending across the country and abroad is connected with an Adivasi woman based in Jamshedpur,Jharkhand.From this land,Santali teacher,activist  and writer Joba Murmu has been selected for Bal Sahitya Puraskar for her  contribution to children’s literature in Santali  for 2017 by the Sahitya Akademi.

Joba,a resident of Karandih(Dukhu Tola) in Jamshedpur, is daughter of a literature C.R.Manjhi .She is  wife of Bal Sahitya Puruskar recipient Pitambar Hansda.She  is among 24 writers who are slated to be awarded on behalf of Sahitya Akademi on November 14,2017.

A decision toward this end was taken by the Executive Board of the Akademi in Guwahati on Thursday.The Awards relate to books first published during five years immediately proceeding the year of Award which required that the books are to be published between 2011 and 2015.

As it is,the Puruskar relates  to books first published during five years immediately preceding the year of Award which required that the books are to be published between 2011 and 2015.However, the award may also be given to a writer based on his/her total contribution to Children Literature during the first 10 years of initiation of the award i.e. from 2010 to 2019.

The Puruskar include a casket containing an engraved copper-plaque and a cheque of Rs.50,000.It  is given to an author of the age of 35 and below as on 1st January of the year of award.

In fact,Joba,Bachelor in Law and M.A in Santali and Hindi,has written a number of stories in Santali including Baha Umal,Bevra,Premchand’s stories and Ravindra NathTagore’s ‘Geetanjali’ is going to be given Puruskar for her short story ‘Olen Baha’.