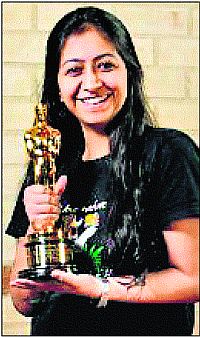 Syamali in Ranchi based DAV school,from where Team India captain Mahendra Singh Dhoni did his Class XII,has hogged the spot light again with its student Neha shining at Academy awards.

“It’s simply great to hold the trophy with the crew”,she said.

Neha,daughter of Ranchi based Santosh Jaiswal,was born and brought in Ranchi.After doing her primary education from Loreto convent,she did her graduation from Kolkata based Maya Academy in Graphics and Animation.

She and her husband Sidharth Shah had worked in a number of Hollywood’s feature films.