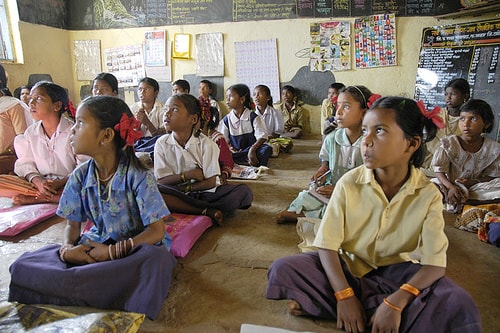 When India gained Independence, the rate of literacy was only 14 % while the Constitution gave every citizen a social gift- Right to Equality. Seventy years later the question is:has the State created a just and equal society?

The answer is No.I agree it was difficult to establish equality due to difference in all most all spheres, different religions, variety of cultural practices and vast difference in economic status, to create a way forward for Development was no easy task, at such a time Illiteracy rose up to be the biggest challenge.

Time and time again government tried to remove the scourge of Illiteracy, but due to population explosion and flaws in the Literacy program it could not happen and till date India is the country of maximum numbers of Illiterates in the world.

There has been a jump in the decadal growth, especially in women literacy, despite this we still have a long way to go to get the desired improvement in the status of literacy. Without literacy, there is no development and we have a real tough challenge in front of us to take literacy to the last man standing.

The situation is such that due to being unlettered, the mass population is unable to avail the benefits being given by the government through various developmental schemes and this difference continues to grow.

The eternal truth remains that the way for development passes through Literacy. So if the country has to develop, each and every citizen has to be made Literate and for that it is must that the rate of literacy has to be improved. If the government is serious about the nation’s economic, social and political growth, it has to frame a solid policy and implement it strictly.

In past few decades Adult Education has passed many landmarks but still a lot remains, a large part of population that has never been to school, another that went to school for few years and then dropped , there are many institutions that are working in the directions to make such a populace literate, State resource Centre is one such organization.

These non literates are given knowledge of not only letters but also about environment, cleanliness, civil rights, financial literacy, legal literacy and gender equality etc. The entire effort is towards creating an educated and literate society that is conductive in nation building.

Central government has always shown its commitment towards Literacy, from the first five year plan through various programs literacy was promoted. In 1988with the formation of National Literacy Mission Authority it gained momentum.

With programs such as Total Literacy, Post Literacy and Continuing Education, it did remarkable work for literacy for the age group of 15 to 35.By the end of 10th five year plan, about thirteen crore Indians were made basic literate, which was a great accomplishment in its own, but when the facts and figures were seen regional differences and gender gap emerged. Taking cue from the past programs, government launched Saakshar  Bharat as the new variant of NLMA.

The main aim of this program was to take the national literacy rate to 80%, to reduce the gender gap in literacy to 10%. Regional differences and other biases also to be taken care of. This program was put into action in 410 such districts in the country where female literacy was less than 50%, according to 2001 census.

The uniqueness of this program was that the entire concept of Adult Literacy was institutionalized, for the first time the adult learner after completion of stipulated period would appear for an assessment test organized by National Open School and NLM and would be certified. This program is towards its completion and the results will be made public after its evaluation.

One thing is made clear here that eradication of Illiteracy is possible only through well structured & organized programs, though it was felt that after Right to Education being pressed the rising numbers of illiterates will stop.It did not happen.

Instead it was seen that children did get registered in to schools but did not reach the class rooms. After crossing the age from 6 to 14 years these constituted the adult learners and the onus of making them literate then fell upon the Literacy programs. In many villages girls are not sent to schools as they are very far off and so these girls become the beneficiary of Adult Education and hence the numbers keep coming in.

The Adult Education program has its limitations and problems.To run it on field level and make it success shows the commitment and resolve of the organizations.

Today the requirement of changes demanded by these institutions should be fulfilled so that they can take literacy to those men for whom earning 2 square meals for his family is more important, to those women who slog for more than 18 hours every day in field, fodder, animal rearing, house hold chores, water.

Program has to be run under a well defined strategy for them so that along with Literacy skill development is also part of learning that they take so that they can earn as well as learn. In every state the program should be expanded according to the need and priorities.

Libraries are must at rural areas so that the learners can read various magazines and newspapers and keep themselves updated about the current political, economic and social situations of the country and not relapse into Illiteracy.

It is not a mammoth task, only strong political and bureaucratic will is needed, all the schools and colleges should necessarily organize Literacy classes in the evenings, educated and retired people who wish to contribute towards nation building should come forward and give their whole hearted support. If we decide that we have to make our country/ state totally literate no one can stop.

The need for adult literacy is far more than we perceive as the demand for quality school education will only arise when parents are educated.