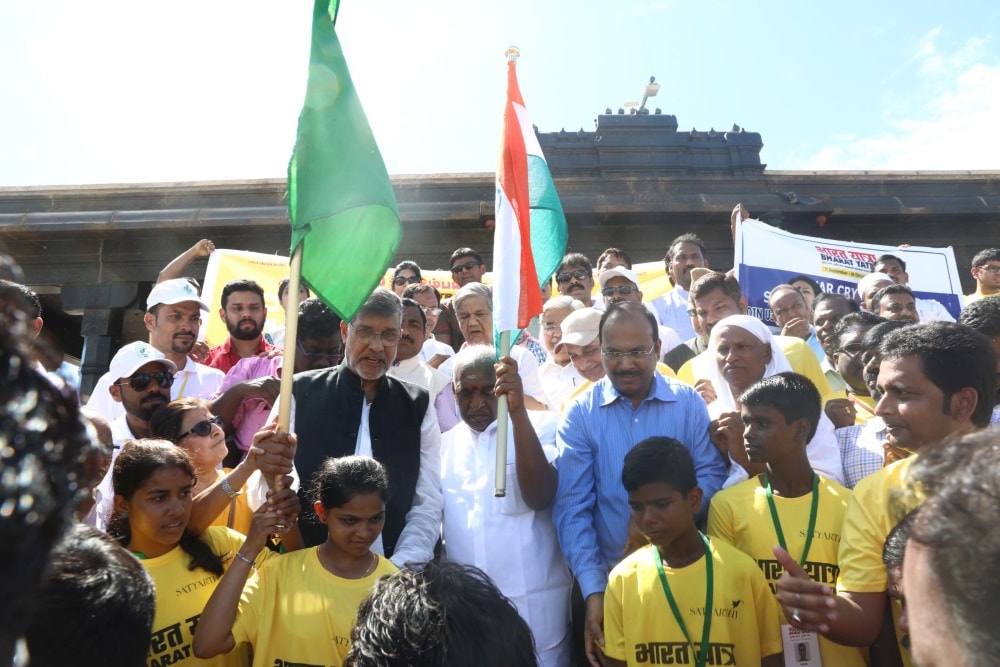 Nobel Peace Laureate, Kailash Satyarthi today launched the Bharat Yatra against child trafficking and sexual abuse from the Vivekananda Rock Memorial here. He appealed to the youth to join the march to ensure the safety and security of the children, who are the future of India.

The Yatra flagged off from Kanyakumari and will culminate in New Delhi on the 16th of October covering 11000 kilometres across 22 States. In Tamil Nadu, the Yatra will pass through Kanyakumari, Salem, Madurai, Vellore and Chennai.

Kailash Satyarthi has been campaigning for the freedom, safety and security for children across the globe for the past 36 years. His Nobel Peace Prize (2014) was for his continuous efforts and struggle for the rights children.

Said Kailash Satyarthi, “Child rape and sexual abuse has become a moral epidemic that haunts our nation. We can no longer remain silent spectators. Our silence is breeding more violence. That is why the Bharat Yatra is the beginning of an all-out war on rape, abuse and trafficking. We hereby declare that we refuse to let victims and their families live in fear while the rapists roam free and fearless. I refuse to accept that eight children go missing and two are raped every hour. Each time if a single child is in danger, India is in danger. Bharat Yatra is to make India safe again for our children. Make no mistake: this will be a decisive war; a war to reclaim the morality of the Indian soul.”

“My war to end all forms of abuse against children starts today. Are you with me?” he asked thousands of people gathered at the venue.

The passionate Nobel Laureate warned, “I am telling these monsters: you are raping MY children. I will stop you, come what may. I won’t allow you to strip off and rape and murder the innocence, smile and freedom of our children. I won’t let the parents of these children live in pain, helplessness, trauma and shame for the rest of their lives. Children are the future of India and there should be no place for child rapists in the country.”

Mr. Satyarthi fondly said, “Kanyakumari holds a special place in my heart. The previous Bharat Yatra I undertook, which was the Shiksha Yatra of 2001, was also launched from Kanyakumari and progressed to New Delhi.” The flag off from Kanyakumari the Vivekananda Memorial, commemorates the anniversary of the great leader’s address at Chicago in 1893.”

The Bharat Yatra conceptualised on the theme of Surakshit Bachpan- Surakshit Bharat (Safe Childhood- Safe India) is the movement of the 21st century which will combat the evils of all forms of violence against children.

The Yatra saw Sh. Pon Radhakrishnan (Member of Parliament from Kanyakumari and India’s Minister of State for Finance and Shipping) and Ilaiyaraaja (Indian Film composer) as guests of honour. The flag off took place at the rock memorial, and Mr. Satyarthi was joined by government officials, school children & teachers, survivors and media persons as he marched for the children of our country.

The Nobel Laureate then marched to the football ground and addressed a gathering of children, college students, local body officials, and civil society, appealing to their conscience and urging them to find solutions to the growing menace of child sexual abuse and trafficking. Government officials, ministers, faith leaders, corporates, civil society, media persons have all shown unanimous support for Mr. Satyarthi and his foundation to undertake the Bharat Yatra.

“Today is a very special day, for all of us. People like Rabindranath Tagore,C.V Raman and several other Indians have won a Nobel Prize in the past, and Mr. Kailash Satyarthi is in the same league, who is a very special person for Tamil Nadu and Kanniyakumari. We thank Mr. Satyarthi for launching the Bharat Yatra to end child sexual abuse and trafficking from Kanniyakumari and Tamil Nadu,” said Pon Radhakrishnan, Union Minister of State for Shipping and Finance.

As the architect of some of the largest civil body movements for a cause, Mr. Satyarthi will be working towards his goal of eradicating all forms of violence against children in the country. His demands for the safety and security of children include pushing for a bill in the parliament to ensure better implementation of laws and stricter action against violence against children

The Yatra is the launch of the three-year campaign against child rape and child sexual abuse which is aimed at increasing awareness and reporting of the cases, strengthening institutional response including medical health and compensations, ensuring protection for victims and witnesses during trials and increasing convictions of child sexual abuse in a time bound manner.

The Yatra has received wholehearted support from Prime Minister Narendra Modi whose message was also read at the launch.