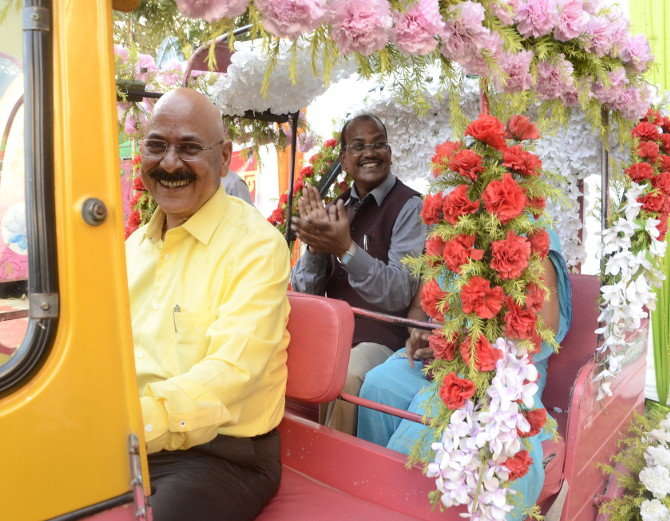 After more than two dozen women auto drivers were trained,they started to rule the roads.Now,Jharkhand DGP D.K.Pandey is out to promote them.

Earlier,these women had got self employed by taking loans,buying auto rickshaws and they began plying pink autos in Ranchi.

As per the government's scheme,the bank has provided them loans at 7 percent interest to make it affordable and convenient.About 25 percent subsidy for the vehicle had come from a central government scheme.

All pink, at least 30 autos  ply in Jharkhand capital.The Ranchi Municipal Corporation, civic body,claims that each of the women auto drivers were able to earn at least Rs 18,000 per month by ferrying passengers including school children. What's more? The civic body has also helped these women acquire a license.

More,with an aim to promote self employment among women and back pink auto drivers-all women,DGP D.K.Pandey hit the headlines in local Hindi dailies by becoming a driver of the pink auto on Friday.

It was the day when IPS Officers' Wives Association had kick started Diwali Mela at JAP -1 ground in Ranchi.The Speaker of Jharkhand Assembly Dinesh Oraon,who inaugurated it and his wife Manju Kumari Lakra among others were present.

Soon after the Mela's inauguration,DGP,his wife Punam Pandey,Oraon and Lakra moved around.Soon,Pandey requested the Speaker and his wife to sit on the pink auto and after sitting and switching on the pink auto,Pandey became the driver."He made them move around for a while",said Kunti Manjhi,an eye witness.

"It's offbeat positive initiative.We all salute him for doing this",said Rajni Kumari,a social activist echoing the sentiments of many young and unemployed women in Jharkhand.