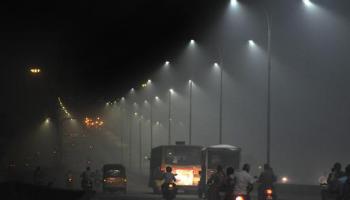 At a time when millions of people suffered from malaria caused by mosquitoes,the scientist who mapped the area in Jharkhand and calculated its impact,has received one of the prestigious awards in bio medical research.

Das,Deputy Director of National Institute of Malaria Research at Itki in Ranchi,has gained the award for his research in vector control in underdeveloped areas in 2015.The ICMR gives this award every alternative year.

His research centred around Plasmodium Knowlesi(primate malaria parasite) from Andaman and Nicobar Islands and evaluation of long lasting insecticide treated nets and durable linings attached to walls of huts and homes across Jharkhand.

During his research,Das monitored insecticide resistance of malaria vectors in Jharkhand villages with experiments on insecticide -treated durable lining on the surface of the earth to control vector-born diseases in forest and rural areas.Along the lined land with deltamethrin concentration of 4.4g/ kg in 100 percent polythene cloth has worked as vector density of three species of mosquitoes was reduced to zero,claims Kumar's research.

If his claim is correct,it means that once the long lasting linings were put up at homes,malaria and even filariasis can be prevented.Kumar conducted his research in two villages of Angara block in Ranchi district where three kinds of mosquitoes were learnt to have been wiped out."No malaria case has been reported from these villages of Angara.This has happened with our method for the first time in India",says Kumar who has authored 78 scientific articles published in journals and books.