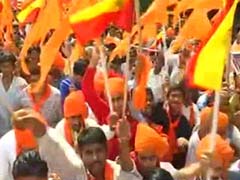 Far away from Rajasthan and Gujarat where Bollywood Director Sanjay Leela Bhansali’s upcoming film Padmavati has rocked the minds of people lies Ranchi.It is here where protest rally has taken place prompting people to talk about him and ask cinema houses not to show its posters..

Already protest rally was held on Saturday in the heart of the capital of Ranchi,prompting the the films sub committee of Federation of Jharkhand Chamber of Commerce and Industries to advise owners of cinema halls not to show the film.

Though their response is awaited,widespread protests by many groups of people, none of whom have seen the film yet,makes one thing clear.The high class beneficiary is Bhansali as his film has become the talk of the town in tribal belt of Jharkhand too.

Simply put,this indicates that Bhansali’s media management has been extremely successful in popularizing the film even before it is released.Indeed,this is for the first time,any film producer had gained so much of publicity before the Central Board of Film Certification(CBMC), a statutory censorship and classification body under Ministry of Information and Broadcasting,Government of India,cleared it to be shown by cinema halls.

As it is,Padmavati is based on Sufi poet Malik Muhammad Jayasi’s epic poem.It is slated to be released on December 1. Its stars include Deepika Padukone in the titular role,Shahid Kapoor as her husband and Ranveer Singh as Aluddin Khilji.But the media management of Bhansali is suspected to have started working since early 2017 when some members of Rajput Karni Sena assaulted the film maker and film sets near Jaipur.Soon,the protests against the film showed no sign of ending.

While these protests and front page headlines in newspapers and magazines must have brought cheers among these stars and Bhansali who is set to earn billions of rupees through this film,the protesters continued to hit the roads.Now,when some journalists have begun airing news in defence of Bhansali,saying there was nothing controversial in the film,the CBMC may delay release of Padmavati.

In any case,Bhansali and his media agency must be congratulated for doing fantastic work by making it reach the minds of millions of people across the world who are expected to see the film and appreciate them.Jai Ho Media managers of Padmavati!