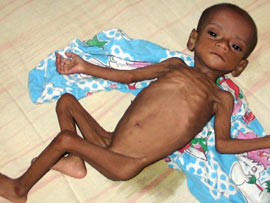 A new chapter was added in the government sponsored programme against hunger related issues today when Jharkhand’s social welfare department launched a scheme to eliminate the curse of humanity-malnutrition.

The scheme billed as Jeevan Asha(Hope of Life) which is slated to be implemented across the state by the department in league with UNICEF,is first of its kind initiative in India aiming to contain the impact of malnutrition on children in Jharkhand.

As per the National Family Health Survey 2005-06,nearly 35 percent of total children in the state –roughly 45,000 -were malnourished.Among them 55 percent were identified as ‘Severe Acute Malnutrition’(SAM),the Jeevan Asha’s central target of attack in the next two years.

Every body knows,the life span of SAM children is just 5-6 years and since death is a certainty for him/her,the scheme aims to identify,train a select group of staff, sensitise the community about the problem,provide food and therapy and monitor the scheme case- wise at ground zero.Toward this end,nearly one lakh Anganwadi workers are planned to be trained for carrying out door to door survey in every village of Jharkhand,says UNICEF’s chief in Jharkhand Job Zacariah.

After the SAM child was brought out from the danger zone,the parent will be handed over a cash of Rs 1500 per month provided the health of this child showed improvement visibly confirming that the mother/father/relative had taken care and utilised the money during the period.

This conditional cash transfer facility has been successful in Africa and there is no reason why it wont work in Jharkhand”,said department’s Principal Secretary Mridula Sinha,a brain behind the novel scheme.