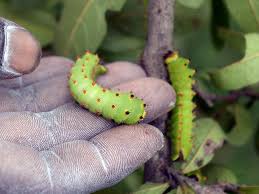 Silkworm is the larva.It is also called caterpillar or imogo.It is visible in the mulberry tree and sericulture shows it is an economically important insect,being primary producer of silk.This is past.

Now,research carried out by scientists of the Ranchi based Tasar Research and Training Instituter(CTR&TI) has concluded that silk produced by silkworms consists of two types of proteins-Fibroin and Sericin.

While Fibroin is the larvae of the silkworm pupae,Sericin is the gum like material that allows the cocoon fibres to stick together.

Since protein powder has high demand from the food and medicine industries,particularly for its uses in nutritional and healthcare foods,CTR&TI scientists claim that their technology to extract these two types of protein from the silkworms can increase the income of Tasar farmers who domesticate these insects in their fields to make money out of it.

Scientists say that pupae is an excellent source of protein(12 to 16 %),carbohydrates(1.2 to 1.8 percent),lipids(11 to 20 %) and is an important food for human consumption.Most importantly,pupae extract is anti-diabetic,anti-bacterial.

"We have found that pupae extract finds application as bio-fertiliser and in making soaps",says AK Sinha,Director,CTR&TI.

This means that if the CTR&TI's claim is correct,its scientists have offered a fantastic solution to make silkworm farmers rich,minimize import  and save millions of dollars in foreign exchange in India.Is there any body in the Jharkhand government listening?