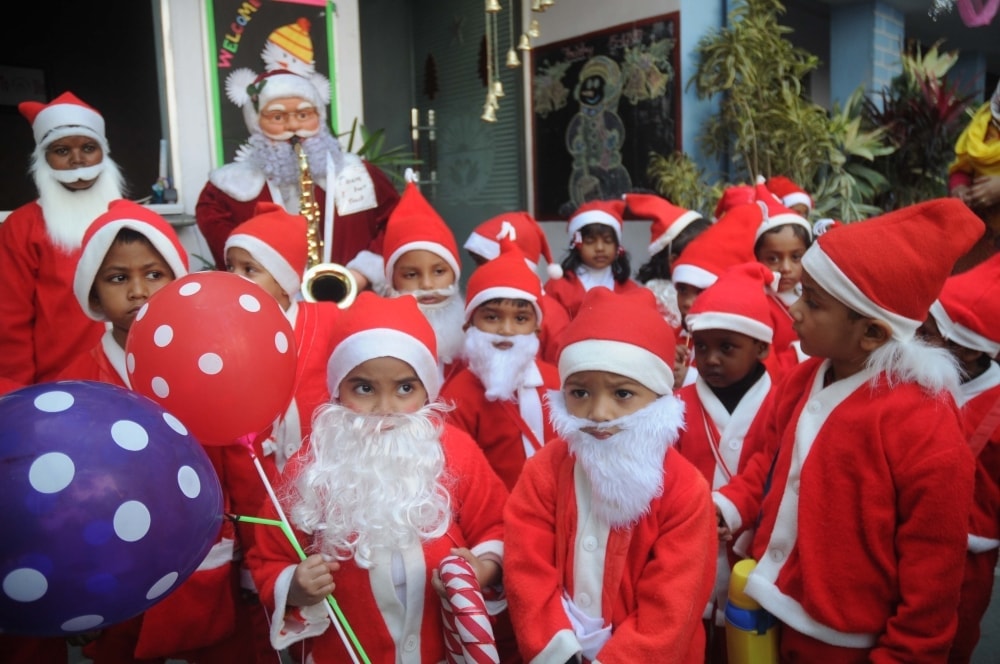 Making Christmas celebrations joyous,these Santa Claus figures have become receptionists of the businessmen in Ranchi and adjoining areas in Jharkhand.

Now,the businessmen have used a mechanism to project an artificial Santa Claus to make money.This was visible in many shops across the country,says a school teacher who had spotted them in Patna,Lucknow,Chennai and New Delhi during or before Christmas.

Records reveal that santa Claus is depicted as a portly,joyous,white beared man-sometimes with spectacles-wearing a red coat with white fur collar and cuffs,white -fur-cuffed red trousers,and black leather belt and boots and who carries a bag full of gifts for children.

However,the businessmen had hired a poor daily wage labour and invested in manufacturing the dress,wigs and plastic face and made them look like traditional  Santa to attract customers."This is a very innovative move to earn money during Christmas festival",says Jitan Murmu,an Advocate.

That Murmu's opinion is correct was confirmed by a random survey carried by www.jharkhandstatenews.com in Ranchi and Dhanbad where 18 Santa figures were studied and all 18 of them were daily wage workers appointed by businessmen during the Christmas festival season (December 15-25).

None of these businessmen were Christians.When asked to explain who was the legendary figure Santa Claus in Christianity,none of them answered correctly.