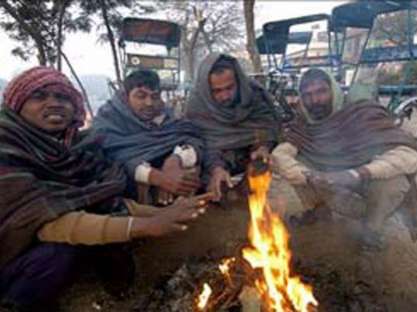 Ranchi recorded 8 degree Celsius whereas Jamshedpur and Daltongunj notched 9 and 5.7 degree Celsius respectively.The temperature of these towns and cities in Jharkhand are going to go down further,predicts Met Department.

Already winter chill has begun to be felt as strong westerly winds were blowing in the state.More,dense fog engulfed the north western parts,affecting railway traffic and normal life in Ranchi.

Met Department officials say that minimum temperatures are expected to dip further as cold winds from the Himalayan area of the north India have already made inroads in the state.

"Winds blowing across Indo-Gangetic plains are strengthening. Moreover,since humidity at 80 percent was decreasing,coldness is bound to felt.Study shows that western disturbance is moving eastwards.As a result,Bihar and Jharkhand will be under its influence for the next two-three days",says Met Department Ranchi Director B.K.Mondal.

No wonder why cold breeze is blowing over Ranchi,Jamshedpur and Bokaro to lower the minimum temperatures.This means that minimum temperatures are going to fall across the state on Thursday and Friday."Wind blow from northern India will also increase further adding to the chill",he says.

Further Mondal said that there are weather data indicating prevalence of chilly conditions over the entire Jharkhand areas for almost a week.