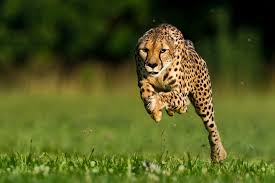 Scientists claimed to have gathered physical evidence to conclude that the key to the incredible speed of the world's fastest animal, the cheetah lies inside this animal's inner ear.

In its latest research the American Museum of Natural History has revealed that cheetah's inner ears are responsible for maintaining balance and posture, while the animal is running and can reach speeds of up to 65 miles an hour.

The research was published in the journal Scientific Reports.The specimen for the above research consisted of 7 cheetahs.Among them six were modern cheetahs and one was a 'closely related' cheetah that is now extinct, and was there between 2.6 million and 126,000 years ago.

During the study,more than 12 other species were also examined during this phase of the research.

The researchers made 3-D virtual representations of the species' inner ear shapes and found that the inner ear shapes of living cheetahs is way different than those of other wild cats living today.

More,the scientists claimed that the balance system, in vertebrates' inner ears, consists of three canals that are semicircular."The canals contain sensory hair cells and fluid. The cells detect head movements. Each of the three canals is angled differently",said UNI report from London.

UNI report adds:"They are all especially sensitive to distinct movements: one is sensitive to up-and-down movements, one to side-to-side movements and the last to tilting movements that go from one side to the other.

New research from the American Museum of Natural History has found that two of the three semicircular canals in the inner ear of the modern cheetah are of different lengths than those of extinct species.Scientists believe the animal's inner ear design evolved over time to make it faster."