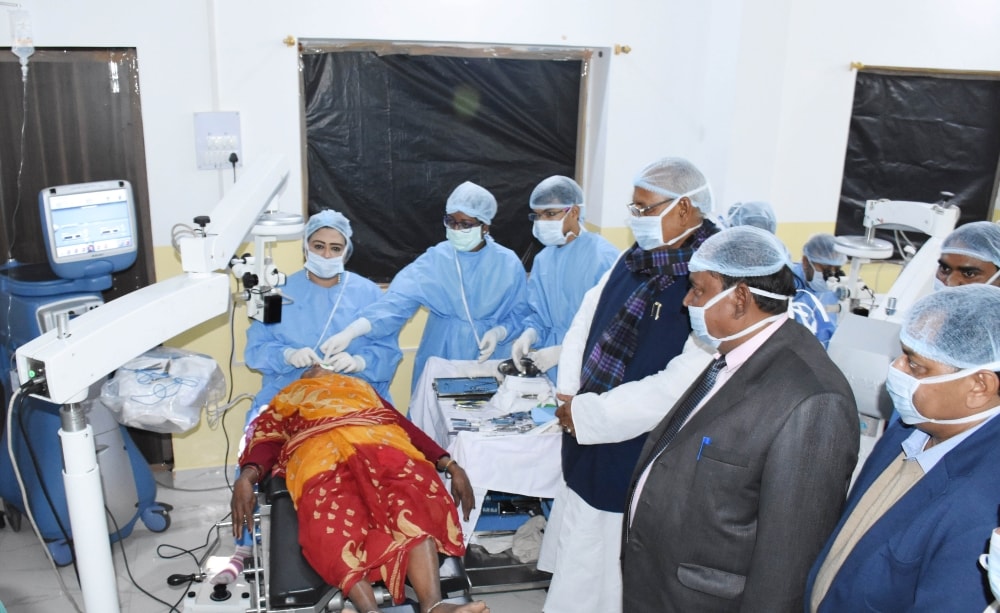 * Dr. Bharti Kashyap operating in the hi-tech OT of mega eye camp in Palamu while the health minister looks on

Using state of the art technology, Kashyap Memorial Eye Hospital’s team of eminent ophthalmologists  Dr.B.P.Kashyap and Dr.Bharti Kashyap  along with Dr.Pritish Pronoy and Dr.Sunil Kumar, successfully removed cataract from the eyes of 125 men and women at the Sohri Chandravanshi Hospital at Bishrampur in Santhal Parganas on February 12,2018.

Medical examination revealed that of the 1122 men and women, who had turned up at the free eye camp, 325 had cataract in their eyes. Many had high blood pressure and higher sugar levels in their blood stream and were advised accordingly. After a final screening, 125 men and women, were selected fit for surgery.

The removal of cataract, was carried out by the team of eminent ophthalmologists using the Phacoemulsification method- a state of the art technology to break the cataract into pieces and implant foldable intra ocular lens while maintaining the highest safety and quality standards as prescribed under NABH.

This method of cataract removal has provided a boon to the poor patients, mostly farmers and daily wage earners , who are able to resume normal life activities quickly and earn their daily bread and butter, without loss of incomes.Phaco cataract surgery is the need of poor people of Jharkhand as post operative safety is maximum after surgery with this technique and need of post operative care is minimum and patients can go to work earlier than usual cataract surgery done in camps.

In addition, a team of doctors has been stationed at the Sohri Chandravanshi Hospital at Bishrampur, to take post operative care of patients. Medicines were also distributed among the patients, absolutely free.

Over the past 40 years, the ophthalmologist family of the Kashyaps have been serving the people of Palamu by holding annual mega cataract detection and removal camps, undertaking cataract surgeries using the state of the art technology, providing post operative care and distributing medicines absolutely free.

"We are here at the invitation of the state health minister, Ramchandra Chandravanshi. Not only Palamu, but I and my team of Kashyap Memorial Eye Bank,Ranchi and Kashyap Memorial Eye Hospital, Ranchi has been regularly fanning out to all parts of the state, from the more difficult terrains , home to some of the most primitive tribes to the far flung rural areas like Santhal Pargana, reaching out to the most forgotten and under privileged sections of the society, educating people on eye ailments and how to take better care of their eyes ," Dr.Bharti Kashyap revealed.

Felicitating the team of doctors of the Kashyap Memorial Eye Bank, Ranchi, state health minister, Ramchandra Chandravanshi stressed that the sight of 125 poor and tribal  men and women has been restored because of the mega cataract camp and the team of eminent ophthalmologists who carried out the surgeries with state of the art technology.