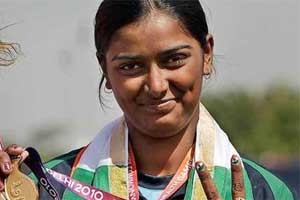 India’s prospect at the forthcoming Asian Archery completion took a jolt today when the ace archer Deepika Kumari announced her decision not to take part in it due to her Intermediate examinations.

Deepika’s coach at the Tata Archery Academy in Jamshedpur Purnima Mahto said:”Due to her Intermediate examinations she will not participate in the Asian Archery tournament in Bangkok on March 9.”

Mahto,who is gold medalist said that in the past she had not appeared in the examinations twice.”This time she does not want to miss it”,she said.

Deepika has returned to Jamshedpur after gaining the top rank in the national archery competition in Hyderabad.The national camp’s chief coach Dharmendra Tiwari said that Deepika was allowed to take part in the examinations.