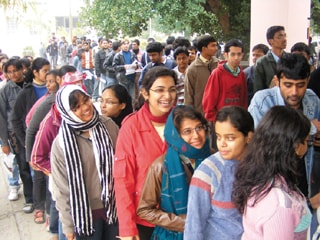 As general elections are slated be held in 2019, the top brass is busy planning to appoint unemployed youths in Jharkhand and Odisha. Their common aim was to mobilise unemployed youths' support and gain electoral mileage.

In Jharkhand, the state Cabinet headed by Chief Minister Raghubar Das has approved the recommendation Amar Bauri committee, ensuring jobs(Grade-III and Grade IV) for the local aspirants of the 11 non-scheduled districts, whose names were enrolled in the district rosters at par with the 14 other districts already enjoying the benefit.

The notification will be issued after the approval of the Election Commission in view of the model code of conduct that is in place due to May 28 Assembly bypolls in Gomia and Silli, said Cabinet Secretary SKG Rahte.

Similarly, Odisha Chief Minister Naveen Patnaik has asked officers to fill up 7,500 vacancies in the different department of the state government by next month, said a report today.

Patnaik, while reviewing the ongoing recruitment exercise on Monday, is on record having said that he would be regularly monitoring the process followed by the officers to fill up the vacancies.

Patnaik also sought a special drive to employ officials in the vacant posts reserved for Schedule Tribe (ST) and Schedule Caste (SC) communities in the next six months.

During the review meeting, it was revealed that around 62,500 positions in various government departments had been filled up in the past four years, and the recruitment examinations had been conducted by the Odisha Public Service Commission regularly since 2015.