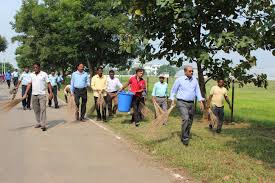 A sense of joy appears to have gripped officials of the state administration following recognition of Jharkhand as the 'best-performing state' in Swachch Survekshan(SS)-2018.

"We are inspired by Prime Minister Narendra Modi who wants to turn towns, cities, and villages of India clean."We are working to achieve the ambitious scheme", said Singh echoing the sentiments of many officials.

Jharkhand was recognised as the "the best-performing state in Swachch Survekshan (SS)-2018", the result for which was announced by Union minister for housing and urban affairs in New Delhi on Wednesday.

At the grass root level, cleanliness was visible in central areas and localities. However, many mohallas and by-lanes in Ranchi, Bokaro, Dhanbad, and Jamshedpur
remained beyond the reach of the municipal system responsible for implementing the Swachch Bharat Abhiyan.

"This is where the state authorities must intervene to achieve the goal", said Ravishankar Singh, a retired civil servant.

In any case, Chief Minister Raghubar Das has thanked the citizens for their support which made the recognition possible. "Compared to SS-2016, Jharkhand has improved tremendously.

The performance of the state and five other cities is a matter of pride for all of us. I thank all the citizens and congratulate the urban development minister and officials for this achievement. We should work towards taking other cities in the list of best performers too."