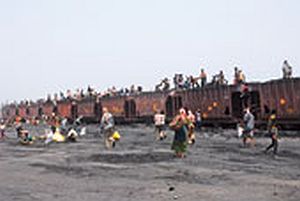 The FIR filed at Khelari police station on Saturday morning revealed that a group of thieves intercepted a goods train carrying coal,halted it and turned one of its bogey turtle.This brought the coal along the railway track facilitating the thieves to take them away,a a feature common to many coal producing areas in Jharkhand.

When a section of the CISF jawans came to catch them,these thieves not only retaliated and launched counter attack,but also looted the coal in their presence,said reports reaching Ranchi today.

Since the number of thieves was more than double than that of them,the CISF jawans were compelled to be on the backfoot.After looting the coal,they fled,said the FIR.

No arrest was made in this connection so far.