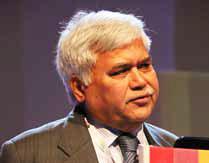 Decks were cleared for appointing RS Sharma as Chief Secretary of Jharkhand.

Sharma ,a 1978 batch IAS officer from the Jharkhand cadre,is currently the DG of the Unique Identification Authority of India carrying the rank and pay of a Secretary to the government of India.

As the state government was learnt to be keen to make him succeed Jharkhand Chief Secretary SK Choudhary who is slated to retire on March 31.

Toward the same end,the Governor’s office has asked the Centre to relieve Sharma as DG so that he returns to Jharkhand and succeeds Choudhary on April 1.