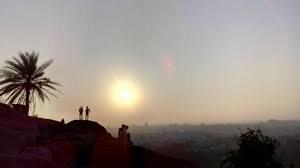 In Jharkhand rain is awaited and expected on Saturday and Sunday.But Chandigarh today received heavy downpour and the mercury dropped by a few notches.

Meteorological Department official said the dry weather may end on Saturday and Sunday across Jharkhand. However,in Haryana, Panchkula, Ambala, Yamunanagar, Hisar, Sirsa and Narnaul were among other places
that received rains.

Due to lack of rain,the environment remained dry in Ranchi on Saturday.In Mohali, Ropar, Ludhiana and Gurdaspur in Punjab were also lashed by rains.

The Southwest monsoon had advanced into Punjab and Haryana, including Chandigarh, on June 28 but had turned weak in less than a week after its arrival.

"The situation has improved considerably in comparison to what it was over the past few days. Although rains are scattered, we are expecting more showers over the next couple of days," Chandigarh MeT Department
Director, Surinder Paul says.