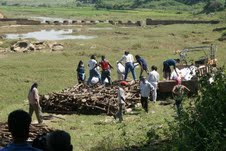 On October 18,they had held mass cremation of 55 unclaimed bodies and immersed the ash and bones in the holy river Ganga.

Today,they did the same with 20 unclaimed bodies.These bodies were decomposing in the non functioning mortuary of the state government run RIMS hospital in Ranchi.Both bear the cost on their own and had set up an organization-Murda Kalyan Samiti-to carrying out their mission.

In fact,Khalid and Chakravorty were friends and hailed from Hazaribagh represented by the BJP’s senior leader Yashwant Sinha in the Lok Sabha.