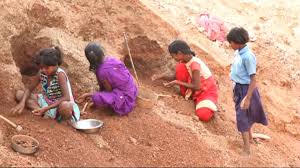 Nine year old child Sudhir Singh carries a bag of sand on his head and walks sweating in this season of rains.He,who is not an odd case is among scores of children who instead of studying in schools work as child labour to help their family members ekk out a living in MICA mining areas of Giridih and Koderma.

Though this socio-economic problem has been a sad reality for long,no measures were adopted by the state government and the police to contain the menace."We have lodged a number of complaints during the past ten years,but no action was taken",said Prabhat Charan,a social activist.

However,a move has been undertaken by the Narendra Modi government activating the state government body-Jharkhand State Commission of Child Right(JSCPCR) to check the reality.So,JSCPCR is slated to soon conduct a survey of child labourers allegedly engaged in MICA mining.

In fact,in a meeting with the Secretaries of different departments at Project Building in Ranchi on Tuesday in the presence of National Commission for Protection of Child Rights(NCPCR) member, Priyank Kanoongo.During the meeting,it was resolved that apart from conducting the survey, a developmental roadmap will be prepared for the child labourers rescued for mines for their rehabilitation.

“At present, we do not have proper figures of child labourers working in MICA mines. Hence a fresh survey will be done to know about their status.

More, figures given by certain agencies cannot be accepted as they had not used any substantial evidence as when the survey was conducted and the sample size,” said JSCPCR Chairperson, Arti Kujur.