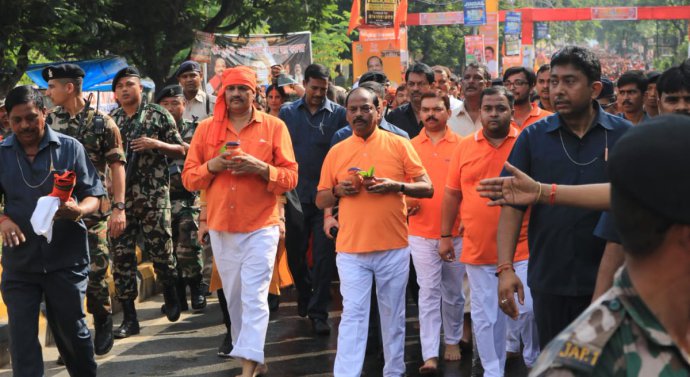 Religious tourism has been an old sector providing employment to scores of people across the country. This has prompted the state government led by chief minister Raghubar Das to develop the state as a religious tourism destination.

Already, the Government is in the process to invest around Rs 600-crore in developing religious tourism circuit at Rajrappa, Ithkori, Deoghar, Basukinath, Parasnath, Anjanidham, and Maluti.

The step can attract a large number of domestic and foreign tourists to the state and the revenue from them can help in the economic growth of the state. "This can take the state forward to achieve the objective of making a developed State by 2022", says the CM Das. A couple of days back, Das, while addressing media after performing ‘Jalabhishek’ (offering holy water) to Lord Shiva at Surya Mandir at Sidgora on the third Monday of the auspicious month of 'Shravan, disclosed his government's religious tourism plan.

Das who is Lord Shiva disciple thanked media persons for giving exposure to 'Shravani Mela' excellently organized by his government at several Shiva temples, especially at Deoghar, and said it has become an international event and it will further help boost the tourism potential of the state. He also appreciated the contribution of women in the overall development of the state.

For the fourth year in succession, Chief Minister Raghubar Das, took part in Kalash Yatra organised by Surya Mandir committee and walked for nearly 4 km (from Hari Mandir premises in Baridih to Shivalaya at Surya Mandir, Sidhgora)  in nearly an hour to perform jal abhishek on the third Somvari of the holy Shravan month.