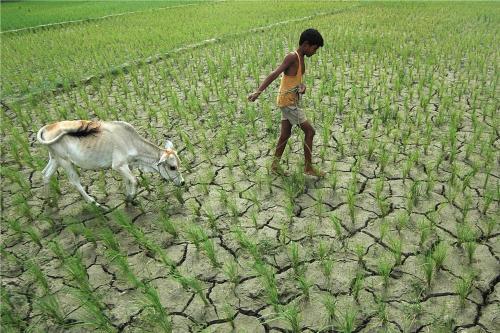 With legs inside muddy water, Shiru Kumari was clipping weeds in her paddy field, a feature common among women farmers in Jharkhand in post paddy transplantation time in Jharkhand.

Asked how does she consider the impact of irregular rainfall, she opined that it is a cause of concern."Bahut Kam Ropni Huwa Hai(Much less paddy transplantation has taken place", she cribs.

Kumari is among scores of male and female farmers are in distress caused by the irregular rainfall across Jharkhand. The Agro-MET experts have opined that Kharif crops coverage has been adversely influenced due to uneven rainfall in Jharkhand especially in the North-West (NW) regions of the State which includes Palamau, Garhwa, Chatra, Koderma, Latehar and Lohardaga.

“Inconsistent rainfall and slow advancement of South-West (SW) monsoon in the month of June and July are the prime reasons for low coverage of Kharif crops across the State. As per the previous prediction of India Meteorological Department (IMD), the State has not received sufficient amount of rainfall required for sowing and transplanting Kharif crops in the peak season,” says Agro MET Expert of Birsa Agricultural University (BAU), Dr A Wadood.

“Ever since the onset of monsoon season, the coverage of Kharif crops across the State till date is just 73 percent which is immensely low in comparison to 2017. Coverage of Paddy is merely 76 percent. A total of 13.5 lakh hectares of area has been covered this season for rice cultivation. Sowing and transplanting time is over. Now, 10 percent increment in Kharif crop coverage can be only expected,” Wadood further states.

He further says that the rainfall had resumed in Mid July and major coverage of Kharif crops had taken place in August first week. As such the delay in sowing and transplanting activities are likely to result in low yield.

Alongside, MET Observatory Centre – Ranchi has suggested that the State by far had received 550.2 mm rainfall against the normal 770.4 mm rainfall registering (–) 29 percent deficit.

As per the data prepared from June 1-August 22, maximum rain deficit was registered in Khunti district with (–) 64 percent shortfall. Khunti district ever since the beginning of monsoon season had recorded 317 mm rainfall till August 22 while 879.5 mm rainfall is considered normal for the respective district.

More, Khunti, Chatra, Garhwa and Palamau districts are reeling under the drought-like situation with the rain deficit crossing 50 percent level. Following all the criteria of the MET, about 1092 mm rainfall throughout the monsoon season is categorized under normal or above normal category for Jharkhand.