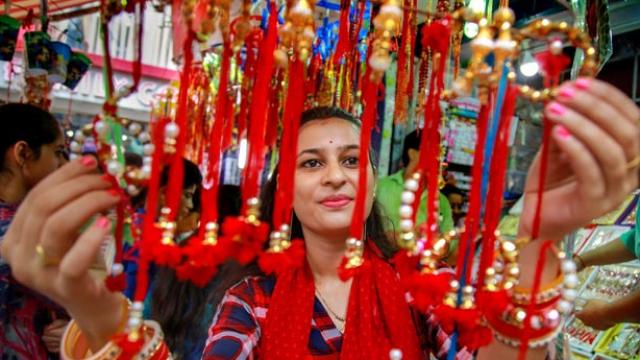 Rain and Raksha Bandhan: Rakhi festival in Odisha and parts of Jharkhand's Singhbhum, Saraikela Kharsawan and Jamshedpur may be marked by heavy and moderate rain.

This may dampen the spirit of Raksha Bandhan in these areas of Odisha and Jharkhand. That may be a cause of concern for those sisters and brothers who celebrate the festival.

Alongside, Met Dept says that heavy and or moderate rain is likely to lash several parts of Odisha and Jharkhand on Sunday-Monday owing to the formation of a low-pressure area in this region. today.

"Under the influence of a cyclonic circulation, a low-pressure area has formed over coastal areas of West Bengal, north Odisha and adjoining northwest Bay of Bengal, the Meteorological Centre", said on Saturday.

"The system is likely to become more marked during the next 24 hours", it said adding that the Rakhi festival can be celebrated amid rainfall.

"Under its impact, moderate rain and thundershower are likely to occur at most places, while heavy to very heavy rainfall is forecast at some places in Singhbhum, Saraikela-Kharsawan, Dhenkanal, Angul, Deogarh, Sambalpur, Bolangir, Jhaesuguda, Baragarh and Keonjhar districts", it said.

"Some areas in Puri, Ganjam, Khurda, Cuttack, Balasore, Mayurbhanj, Kalahandi, Boudh, Sonepur and Sundergarh districts are likely to get heavy rainfall as well", it said to PTI.

While several areas of Jharkhand lacked normal rainfall, most parts of Odisha have been lashed by heavy rains since the beginning of August due to several spells of low pressure.

In any case, in Hindu tradition, rainfall on the day of Raksha Bandhan is considered auspicious."We are waiting for the Rakhi Bandhan to take place on a rainy day", says a sister as her brother smiles.