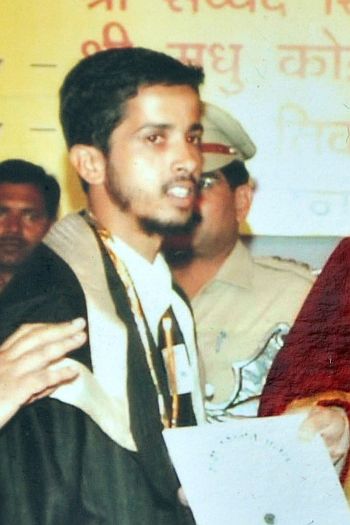 National Investigation Agency and the police may have records to arrest Manzar Imam in connection with the Hyderabad twin blast case which left 16 dead on February 21.But none of his family members are ready to accept their allegation that he is a terrorist.

“If the NIA,STS and the police prove the allegation that he is terrorist we,the family members will shoot ourselves dead”,says Mohammed Safdar Imam,elder brother of Imam. Safdar is among five brothers whose mother was in hospital undergoing treatment of kidney related ailment.

Imam,who is accused in as many as 15 terror related cases and the NIA believe that he was mixed up with Indian Mujahideen and Students of Islamic Movement of India and had undergone training at SIMI’s camp at Arnakulam in Kerala in 2007,had reportedly done graduation in science from Ranchi college and gained first class.Subsequently,former Governor Syed Sibtey Razi in convocation organized by the Ranchi University conferred gold medal in 2007.

In 2008,the Crime Branch sleuths of Gujarat police arrested a man called ‘Danish’ in conection with the serial blast cases of Surat and Ahmdabad.As per the police,Danish had disclosed the identity of Manzar.

Eversince then,Manzar was wanted by the Gujarat police,NIA and the police in Jharkhand.Though they had launched raids at his Bariatu area a number of times,none of them could catch him.

Asked if Manzar Imam was innocent,why did he not surrender before the investing agencies,a family member confided that he was terror stricken.’Al of us were terrified. Manzar had fled from home”,he said requesting to keep his identity secret.”The police and the media have spoiled our life.Only on the basis of some one’s statement,he was described as terrorist. Manzar Imam was a good student”,said Safdar.