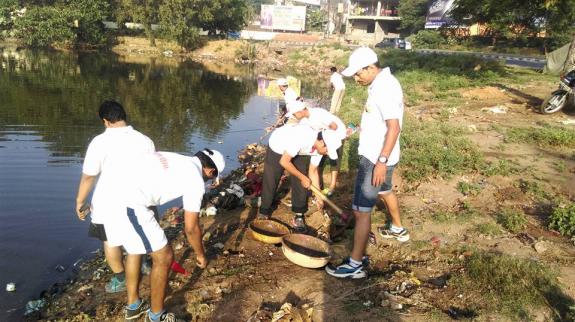 *Karamtoli pond in Ranchi getting ready for Chhath festival

At a time when Lok Sabha polls are around and thousands of devotees of the Chhath festival need ghats to offer prayer to the sun god, water bodies in Ranchi, capital of Jharkhand, are in shambles.

These water bodies-Badka Talab and Karamtoli Talab-are ponds under construction. These ponds were facing the brunt of acute water shortage. This was mainly due to the restoration procedure that had a severe impact on the groundwater level and the state government sponsored  'beautification work'.

With water shortage in these reservoirs, these ponds, each used as a site where devotees during the Chhath puja, are going to cause hitch to the devotees now.

The delay in completion of the ponds restoration project has aroused a difficult situation for the devotees who often heads to these water bodies to perform the customary rituals there.

Despite the assurance of the state government officials belonging to Ranchi Municipal Corporation are finding it difficult to clear the mess ahead of this auspicious occasion observed by the city residents in a significant number.

The surrounding area of the water bodies remains a concrete jungle with hardly ample space left for the devotees to perform the rituals without any hassle and posing a severe threat for the public who will be visiting the water bodies next month.

Edgy iron rods, rugged staircases, strew piled up adjacent to the water bodies, no clear demarcation of ghats is the present status of the most water bodies here when merely a few weeks is left for the auspicious occasion to start.

At Badka Talab( Ranchi Lake) is undergoing refurbishment at a cost of Rs 14 crore or Banas Talab or Karamtoli Pond — to name a few, several water bodies within the municipal periphery that was selected for renovation are in a shambles.

Notably, the beautification project rolled out at a cost of Rs 3.35 crore from Chutia Pond in 2016 covering both major and minor ponds for revamping and de-silting the water bodies was expected to get complete within two years. March 2018 was the deadline issued by the Minister, Department of Urban Development, Housing and Planning, CP Singh to accomplish the ponds restoration work.

However, regardless of several rounds of warning to the contractors and consultancy agencies to wrap up the project in a stipulated period and regular intervention of senior officials over this issue, nothing could change the fate of the water bodies – planned to be developed with all modern civic amenities.

In the first phase, the RMC initiated the task of giving a facelift to the water reservoirs that includes — ponds in Madhukam, Morhabadi (Divy-ayan Pond), Hatma Basti, Teter Toli, Tunki Toli, Bariatu (Joda Talaab), Karamtoli Talab,Devi Mandap Road in Hesal, Kadru (behind Hajj House), Hindpiri (Chota Talaab), Dhumsatoli in Chutia and Banas Talaab at a total sum of Rs 14,59,63,800. A separate project was planned and conceived for cleaning and revamping Ranchi Lake.

Besides de-silting the water bodies, the restoration work also includes making boundary walls around the ponds, constructing pathways, planting saplings and mounting up lights alongside the dew ponds. In addition, on the lines of big cities, construction of a few structures which includes eateries, gaming and fun zones at a few demarcated water reservoirs is also proposed.

Playing the same old broken record during the inspection, the Deputy Mayor said, “RMC is vigilant and all attempts will be made to clean the ponds at the earliest keeping the needs of the devotees.” Ironically, the Municipal Corporation that had started cleaning up ponds after Durga Puja conclusion and is yet to complete the cleaning work of all ponds, the Deputy Mayor during the inspection stated that 75 per cent cleaning of all the water bodies here have been completed.

Desperate to have a site along these water bodies for the Chhath puja, many family members seem to be running around to find a space. As a result, some of them have put up their names at the sites. This was perceived by Municipal Commissioner, Manoj Kumar, as 'illegal' and, after locating names inscribed at the sites (ghats) during the inspection, has asserted that people were destroying the beauty of the pond sites. They will not be spared,he said. “There is no policy that a person can reserve a place of their choice at the pond sites. Rs 2,000 will be penalised from the defaulters, in case, found violating the norms.”