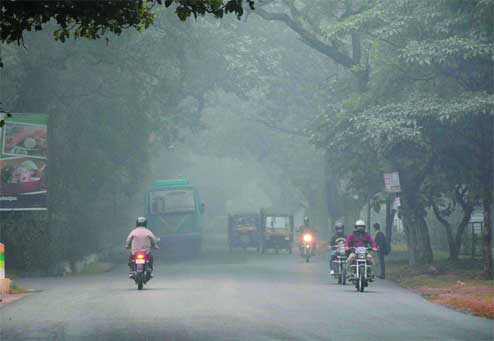 When Prime Minister Narendra Modi led the foundation stone of several irrigation projects in Daltongunj, including Rs 2,391.36 crore Mandal dam that can provide water to 19,604-hectare area in Palamau and Garhwa in Jharkhand and Aurangabad and Gaya in Bihar, the day was Saturday, time pre-noon and temperature 14 degrees.

Most of the crowd had come from schools and offices in the morning when the temperature was below 10 degree Celsius."It was too cold in the night. Had it been a warm day, more people would have come", said a school teacher echoing the sentiments of a dozen farmers who attended the PM's meeting.

Many of these farmers were aware of the weathermen saying the weather will take a turn as there are chances that on January 7 onwards some part of the State will witness rain or drizzle.

Director Ranchi Meteorological Centre BK Mondal says, “Dipping mercury will affect the daily life of the residents across the State.  But there are chances that the northern part of the State can see rain or drizzle as well.”

As per Met data, the temperature at nights can be 2 to 4 degree low as a cold wave is not going to leave at present and the city dwellers in Ranchi, Bokaro, Dhanbad and Jamshedpur are expected to face 15 more days of cold wave.

The existing weather conditions would continue next four-days in Ranchi as the impact of cool northwesterly winds will continue to blow over the State registering an acute dip in mercury level in the days to come.

According to the weather bulletin released by the MET Observatory Centre – Ranchi on Saturday, the Capital City is expected to register temperature between six to eight degree Celsius in the coming days while central and western parts of the State -like Bokaro, Gumla, Hazaribagh, Khunti, Ramgarh, Palamau, Garhwa, Chatra, Koderma, Latehar and Lohardaga -will also experience bone-chilling cold for the next few days.

As per the weathermen, the temperature level across the State is expected to remain in the range of five to eight degree Celsius.

Notably, the residents of the State Capital including other districts have been experiencing extreme cold conditions with minimum temperature dropping by five degree Celsius below normal range since mid-December.

Indeed due mainly to the cold wave, the people who had gathered to hear the PM Modi remained calm.