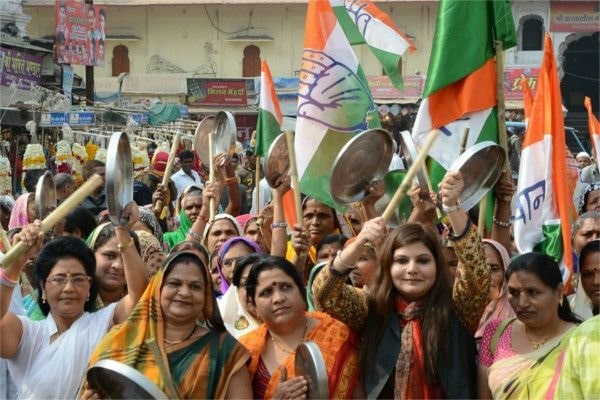 The party is weak. In the Lok Sabha, zero number represents the grand old party. Even in the 81 -member Jharkhand Assembly, it has just six MLAs.

Against this backdrop, the state unit of the Congress has put up posters and banner welcoming it president Rahul Gandhi who is coming to Ranchi to launch campaign for the general elections expected in April-May.

To attract the attention of the people, especially tribals, the state unit of the Congress appears to have termed his rally as 'Ulgulan' or uprising against the BJP-led Governments.

The rally is slated to be held on March 2. An attempt is on to use this rally to bring unity among its leaders and help opposition parties to form the grand alliance-Mahagathbandhan. So far it has joined hands with the RJD led by ex Bihar CM Lalu Prasad Yadav and his family members including son and the state's main opposition -JMM with 2 of total 14 MPs and 18 of total 81 MLAs in Jharkhand.

Though Rahul's tie-up with Lalu Yadav may provide fodder for the ruling BJP, his party's central aim appears to drive away the ruling BJP which has 12 MPs and 44 MLAs.They look united and confident as a silent wave in favor of Prime Minister Narendra Modi is sweeping across the state. Though the opposition does not accept it, the Congress leaders want Rahul Gandhi is to drive the BJP out of power.

As per the plan, the party in association with its allies may call an Ulgulan to make sure that the country is free of the BJP and its so-called 'oppression'. The rally will be held at Morhbadi Maidan.

"We are trying to make Morahabadi rally see a unity of Opposition parties. Leaders of its allies JMM, JVM, and the Left would share the dais with the Congress president,” says the state unit chief of the Congress.

The rally has been named as ‘Parivartan-Ulgulan Maharally’.It is going to be the formal inauguration of the Congress-led Opposition’s electioneering in the State.