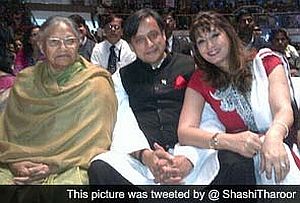 On the Women’s Day today,after BJP’s women supporters banged the car of Shashi Tharoor,Minister of State for Human Resource Development,who was on his way to an event at Delhi’s Talkatora Stadium,his wife, Sunanda Pushkar was critical.

Pushkar told media persons : “Why are they protesting? I heard they have even broken the red beacon on Shashi’s car. What wrong has he done… to deserve this? I did not like it at all.”

As it is, Tharoor attended the function with Pushkar and Delhi CM Sheila Dixit, and tweeted a photo of the couple with Dikshit.

But the BJP’s women cadres were protesting against the lack of safety for women in the capital at a function to mark International Women’s Day.