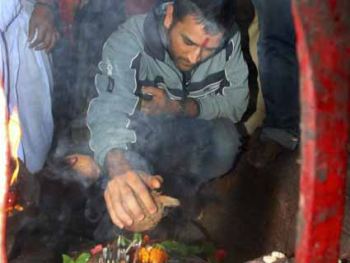 Dhoni,who had led India lead 2:0 in four test series,was accompanied by his friends.

Though offering puja to Goddess Durga by him was nothing new,Dhoni looked calm and composed at a time when many commentators including Sunil Gavaskar,who had criticized him in the past and wanted that he be droppped from the test match format,have begun to hail him.