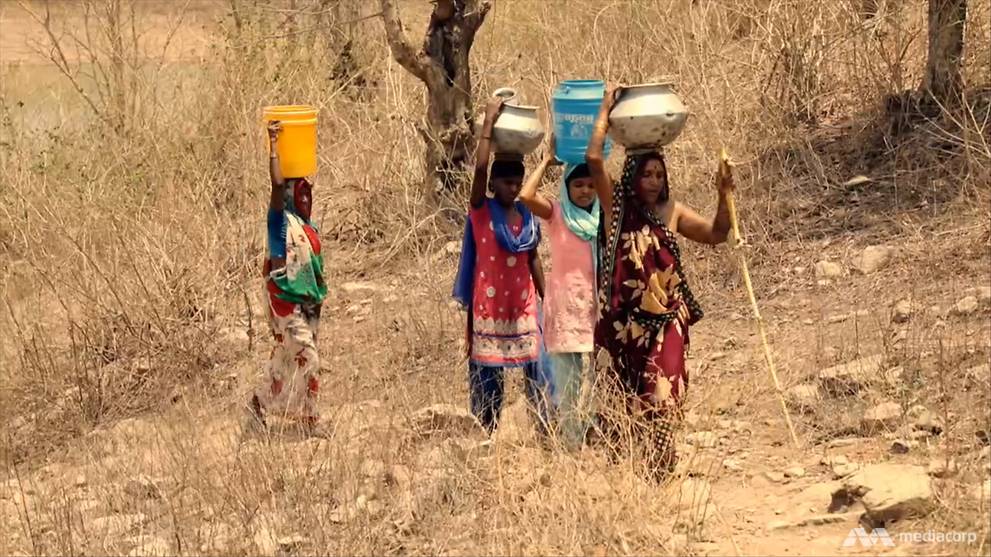 Samuel Taylor Coleridge (1772–1834) was the premier poet‐critic of modern English tradition and wrote these lines in his famous collection "The Rime of the Ancient Mariner" in 1834. The context of the poem was about an Ancient Mariner who met with a shipwreck after a massive storm and how he struggles his way back to his home country. It was during his struggle with the mighty sea, that he said these line for the Salty Sea Water that he was surrounded with and was till parched.

But with our insatiable developmental race and unsustainable modern lifestyle, we are making these sad lines relevant to us on the land itself. Every year, half of the Indian States declare Water Emergency in summers, States keep fighting over the river water rights. Every year in some state or the other there are droughts and some other have floods – we call them “natural calamities” and move on with life.

The sad part is – that we knew much advanced Water management even 5000 years back, the remains of the Dhola‐Vira site in Gujrat is an archeological evidence for this. In spite of being descendants of such a great civilization, today we find the entire country parched. Like our agriculture, we have made our living also weather dependent. If there is a good monsoon, all the people will get Water, but if it’s bad only rich will get water. So people have no option, but to buy or borrow or steel Water. Sounds quite hard to believe but that’s a reality today. In fact a few years back, in Maharashtra, there was a curfew imposed on Waterbodies under article 144, that no four people would gather close to a waterbody and to impose this even paramilitary forces were deployed.

So we did some studies on various states about the present situations, Governments planning and their respective understanding or preparedness for the crisis. As we all know, our cities are growing “Smarter” these days, many city are also becoming “AMRUT”, so of course they would have done some provision for the basic necessities of life like Water.

Here’s the study on the city of Ranchi – the state capital of Jharkhand. But before we move on, let us understand the city profile in terms of the available Water resources and other demographic profiles like population etc.

There are six dams or Water reservoirs in and around the city, namely Kanke, Rukka, Hatia, Dhruva, Getalsad and Patratu. Then we have some huge lakes & ponds for Water including Ranchi Lake, Line Tank Pond, Jail Talab, Karamtoli Lake, Batam Talab, Kadru Talab, Hesag Talab, and Chittaranjan Talab and so on. And then comes the rivers and rivulets, so primarily we have Potpoto, Subarnarekha, Jumar, and a few other tributary of Damodar,
which you can spot here and there in the city. Now that looks like a Water paradise on a plateau, isn’t it?

But hang on, before coming to any conclusions, here are some of the new paper headlines that would shock you that in a city as rich as that in Water resources, is this also a possibility? Yes, that’s the ground reality for the State Capital today. How it happened is very simple to understand. We’ve made Water as the de facto waste transport medium, we wash everything with water clothes, utensils, cars etc. and everything is washed with a poisonous harmful chemical, which is mixed in water, converting it in to sewage. From industries to homes, schools to malls everyone everywhere create sewage, and this sewage water naturally finds its way to a natural Waterbody.

Therefore this Water gets converted in t a poisonous concoction of harmful chemicals – that’s unfit for drinking or irrigation or animals and birds or even the fishes or other aquatic organisms. So this good for nothing water eventually settles down its chemicals to the bottom and the top layer is again good clean water. Yes, the level would get reduced, so it the water carrying capacity. The obvious corollary is – that the underground aquifer recharge will also stop. Thus the ripple effect is – that the hand pumps and the borings will also not work. So it’s a chain reaction.

But the BIG question arises ‐ Does the government know about it? What is the Water situation? What is the underground Water table level? Is it really going down? So let’s see what and how much government knows. Here’s a report of a study done by Central Ground Water Board in the year 2012, which means 7 years back.

As you can see, the government of Jharkhand, along with Central Government was aware that the complete dependency of the administration for drinking water is on monsoon. The table clearly shows that the underground water table in meters below ground level gets halved after the monsoon. And that’s primarily because it’s a plateau. In the Premonsoon map, you can clearly see how parched the city becomes, when there’s only one small area left in the entire city to have Water at 2‐4 mbgl, whereas the post monsoon map increases that region to almost 40% of the city.

So the government conclusion is simple – our rain water harvesting system is in excellent situation. Just that they are unable to handle the summers. And the city gets to a Water emergency level every summer.

The obvious question that arises now is – what’s the way out? How do we come out of this dead lock situation? Is there a way out?

The answer is – we need to find out a sustainable ecological solution, which is in complete harmony with nature.

So is there a system that exists in nature for making Water drinkable? To understand this, we need to know what is drinkable. Drinkable naturally. Because there’s a difference between the definition of nature and man. Today man follows WHO (World Health Organization) parameters that nature doesn’t understand. Naturally drinkable Water is the one from the rain, one from the natural spring, from the natural river – a Water that is so pure that fishes are happy and lively, fishes breed in this Water, the Water that replenishes the underground aquifer – that’s drinkable, natural Alive Water.

Thus the key is to keep our Waterbodies in ALIVE condition, so that it’s fit for the fishes. They don’t suffocate to death, they get the food within, the toxins are removed and their natural aquatic food chain is on, which means their food is produced in the Water naturally. Now this kind of Alive Water will consume the sludge in the bottom, open up the seepage capillaries in the soil and link the surface Water body to the underground aquifer enabling the maximum recharge, and also ensuring that there’s never ever any scarcity of drinking Water in the city. So here we have the Urban Development Master plan for the Ranchi City for year 2037. We can easily sport the turquoise colored Waterbodies in this map. All we need to do is to restore all these Waterbodies to their natural ALIVE state and we can ensure that there would never ever be a Water crisis again in the city.