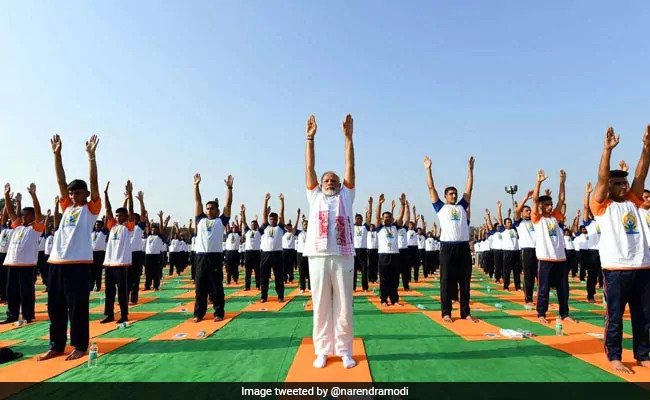 Yoga for the heart. With this theme, fifth International Day of Yoga 2019 on June 21 is being observed across the globe.

In India, yoga day event will be marked by Prime Minister Narendra Modi performing Yoga along with 30,000 people, including Chief Minister Raghubar Das, Ministers and senior officials of the state in Ranchi.

Right now, Ranchi has turned clean. The temperature has gone down with pre-monsoon rains and clouds hovering in the air of the state capital. In view of the monsoon, the venue-Prabhat Tara ground has been brushed up and pandals set up.

.Already, hundreds of residents are excited. Many of them have been practicing for the last two weeks. On the yoga day, they have started thanking Prime Minister Modi for performing Yoga with them in their own city.

"It's a pride to do yoga with Prime Minister Narendra Modi. We are thankful to him for providing us an opportunity to get a selfie clicked with Modiji," said Ashok Kamal, a school teacher of Ranchi.

At the venue, forty sectors were made for yoga performers who will accommodate 400 to 800 people. Eight medical huts were constructed.

A Special Protection Group (SPG) was deployed to look into the security on this day. Around 4,000 security personnel of the state and para-military forces will be deployed.

The entire lanes and by-lanes were cleaned up. Even the Raj Bhawan where the PM Modi arrives in the night by 11 pm on June 20 to perform yoga in the morning at 6 am at Prabhat Tara ground was decked up.

"If he comes to Ranchi regularly, its roads and colonies will become the cleanest city in the country. Otherwise, Swacch Bharat Abhiyan fails to maintain cleanliness ", said a senior citizen.