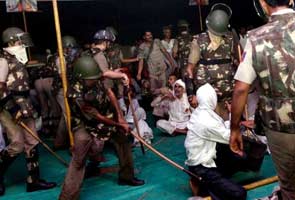 Panda’s observation is symptomatic of priests of the Shiva temple in Deoghar where a number of VIPs had turned up to revere the Lord Shiva on the Shivratri day yesterday.

Unlike hundreds of devotees who stood in the queue to offer puja,the VIPs including Jharkhand’s Principal Secretary(Personnel) Aditya Swaroop were issued the VIP entry pass.A separate entry gate was created for them and a section of the security forces was deployed to ensure they offered prayers smoothly.

But the crowd was restless and each wanted to outsmart the other one to enter into the sanctum sanctorum and come out of it.This resulted in a melee.The security forces canned the devotees. Swaroop fell down and suffered the backache.

Though Swaroop was not available for comment,an eyewitness said : “Some VIPs remained unhurt.Others like Swaroop felt the heat of push and pulls an the lathicharge .”