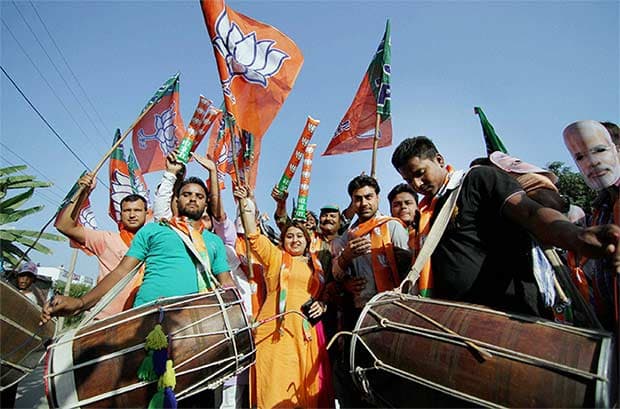 Two scenes were visible along road sides in Ranchi today when a historic move by the Narendra Modi -led NDA government nullified Article 370 in J&K.

First,scores of people exchanged color and cracked crackers welcoming the move,traffic on busy main roads near Kutchery was paralysed due to the procession sponsored by the opposition JMM.

The procession was organised to oil the party machine for the forthcoming Assembly elections expected to be held before end of the year.The party men had put up bill boards,each showing pictures of its president Shibu Soren and his son Hemant Soren who is acting president and leader of the opposition in the state Assembly and a slogan "Akrosh Rally(Resentment) rally".

In any case,their rally activists caused untold miseries to commuters who were compelled to remain standstill on the roads due to the jam.Sadly,the traffic policemen looked the other way. One commuter shouted and yelled against the state administration."Why such rallies are allowed to take place along busy roads.The main roads must be banned for dharna and rally",said a retired bank officer.

Though none of the participants in the procession who were carrying party flag, looked exasperate,many of them joined hands with the ruling BJP supporters who were celebrating historic move by the Narendra Modi.The move has nullified Article 370 in J&K.As per this move,J&K will no longer enjoy its special status.

Also,all provisions of the Indian Constitution will be applicable to J&K now on.In addition,government has proposed J&K be a Union Territory with Legislature,and Ladahak as a separate Union Teritory without Legislature.

The move has been met with a wide range of reactions on social media.In Jharkhand,this move is going to wash out the fate of opposition parties in the Assembly elections."The divided opposition comprising JMM,Congress and others have no scope to sail through in the coming elections",said a school teacher echoing a general opinion of educated urban and rural people in Jharkhand.

This view however was not acceptable to any Opposition leader.For instance, Subodh Singh of the JMM,said:"This Modi government's move will make no impact on unemployed youths and framers.They will teach ruling BJP a lesson in the coming election as many of them were badly affected by monsoon failure causing drought like situation emerging in many parts of Jharkhand."