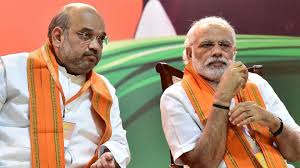 These guys played a long game. In Feb 2019, they passed a resolution making the Governor equivalent to an elected assembly, for states under president’s rule. And that’s what happened today. No SC process to stall this

No one figured that this would be used today. The governor recommending to the president scrapping the article is legal enough

Did someone say... People in Govt sector work slow ??? Proves ‘Where there is will, there is a way’. Summary of a brilliantly executed action:

Summary
1. Form govt to dissolve at right time.
2. Withdraw support to empower governor.
3.Controversial dissolution and Governor’s Rule.
4. Use 356 to enact President’s Rule, empower Governor, and use Parliament to enact Bills for J&K.
5. Get validated from SC using SC/ST bill trial balloon.
6. Use 1954 precedent to transfer power to an assembly which means governor now.
7.Done

Also, the SC test was passed by floating the trial balloon of J&K SC/ST Reservation Act, in which SC accepted Governor as the State Assembly.