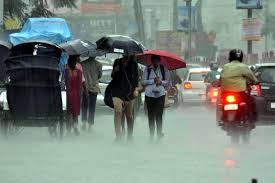 "Bhuke Nahi Marenge"(Will not dye hungry), said Sanatan Munda, a tribal farmer in Khunti. His observation is symptomatic of general opinion expressed by 33 farmers in Khunti, Ranchi and Hazaribagh.

Their opinion was sought with an aim to understand the implications of poor monsoon rains this season on paddy crops in Jharkhand.If these farmers are to be believed, the sowing took place late August and the first fortnight of September,

Moreover, due to poor monsoonal rains, the paddy saplings were not sown in up fields(tanr land).This means the cultivation was centered around low(don) land and as such none of these farmers expected bumper paddy harvest.

Worse, they opined in common that due to rain deficit, the serious water crisis can be expected to hit people across Jharkhand in 2020."If the state government does not prepare a plan in advance, people will be worst victims", said two educated farmers in Kanke, Ranchi.

Their expression at ground zero is backed by the Met Department's data showing that in the last week of August, cumulatively below normal rainfall activity is expected to be there across Jharkhand.

At the same time, the rainfall deficit recorded at 34 percent in Ranchi and Hazaribagh on August 16 has improved to 28 percent on August 23.

The MET Centre Ranchi said, light to moderate rain or thundershower with isolated heavy rainfall is likely to occur at most places on August 25 and at few places till August 29 over Jharkhand.

“Because of the ongoing rain-bearing system, in the coming week, monsoon is expected to be normal for at least two to three days and fairly widespread to widespread rainfall activity is expected. After that scattered rainfall will occur for the next two days. Cumulatively below normal rainfall activity is likely to occur over Jharkhand in the coming week,” said Senior Scientist, MET Observatory Centre Ranchi- Dr. RS Sharma.

For Jharkhand cumulative rainfall from June 1 to August 23 was 541.6 mm against the ideal amount which should have been 754.3 mm causing a deficit of 28 percent over the entire State."In the coming summer, we will face a water shortage. The government has to take action in advance", said an old farmer in Ratu block of Ranchi district.