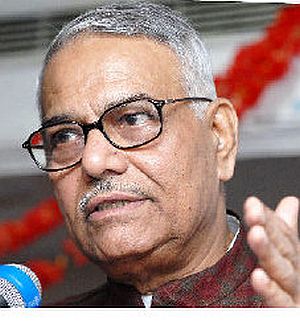 There is no let up in the intra party feud over appointment of Ravindra Rai as the president of Jharkhand BJP.Though Rai was struggling to win over the rival factions led by Raghuvar Das,ex Deputy CM and Saryu Roy,ex MLAs,senior party leader Yashwant Sinha today skipped a parliamentary party meet.

Rai told a local TV channel that all will be fine soon,Das,Roy and Sinha were learnt to be cut up with him on the ground that he was not a loyal worker of the party.He had sided with ex CM Babulal Marandi and after parting ways with him,re joined the party only to get patronized by ex CM Arjun Munda.

Now,Sinha was waiting to meet Singh.