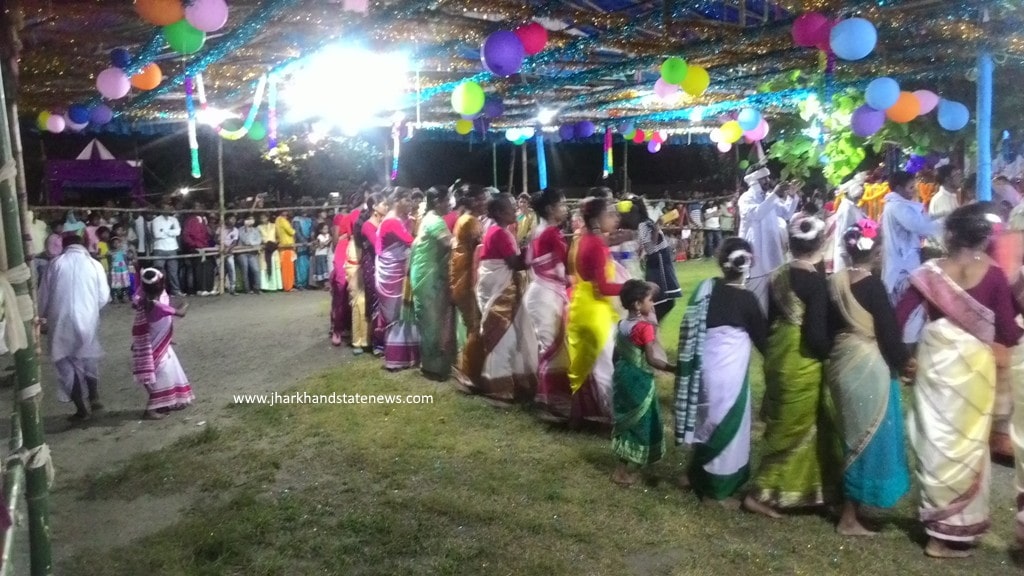 Continuity and change marked the celebration of the Adivasis' annual festival -Karma. It offers a simple mechanism to escape from eco-sins committed by humans across the world. No joke this!

The change is visible on men, women and children who used their smartphones to take pictures of the rituals performed by their friends and relatives in their field. Here in the field a branch of Karma tree was planted and they danced while High Figh Stereo played  Bollywood song -O Saki Saki.

Soon after taking pictures, they used their smartphones and WhatsApp to post these pictures to their near and dear ones. Most of them moved around in mo bikes and wore branded clothes. Dance, music and drinks continued till late at night on Monday. Some of them spoke in English and exchanged greetings on their laptops."It reflects modernised acts of Adivasis on their annual festival of Karma", opines Indrani Munda, a school teacher.

In 1898, D.H.E.Sunder, author of Final Report on the Survey and Settlement of Palamau Government Estate, Palamau District in Chotanagpur, Calcutta, recorded that "it is observed by all aboriginal tribes of the district except Bhumihars. A branch of Karma tree is planted in angina(courtyard of every household and offerings of roti and cucumber are made to it by women of the house. In the evening and all through the night there is dancing and singing among girls and boys and much feasting and drinking goes on. In the morning the Karam branch is sprinkled with dahi and thrown into the nearest river."

Today, many tribal informants said Karma is observed more by the Mundas and Oraons and they had adopted it from them. As per their tradition, the Karma branch is brought by unmarried boys and girls. It is planted in the courtyard on the day of Karma. They then pour milk on it and girls offer flower.Kasaili,achat(arwa rice) and flower cakes to the deity. As it is not done in all tribal houses,male and female members of such families attend the Karma rituals at their neighbour's house. The male and female members of other tribes and backward castes who were now identified as 'locals' dance and sing for the whole night as they did on Monday night. After rituals are performed,Karma story is narrated which is as follows:

"Once upon a time there were seven brothers. They were busy in agricultural work. They had no time even for lunch and as such their wives used to carry lunch to the field daily. Once it happened that their wives did not bring lunch for them. They were hungry. In the evening they returned home without food. They found that their wives were dancing and singing near Karam branch planted in the courtyard. This made them very angry and one of them lost his temper. He snatched the Karam branch and threw it in the river. The Karma deity was thus insulted as a result of which, the economic condition of that family went on deteriorating. They were starving.

One day a priest told them that the Karam rani(queen) was angry and as such she must be appeased. If it was not done, their condition would go on worsening. The seven brothers then left the village in search of the Karma rani. They kept on moving from one place to another but could not catch her. One day, they found the Karam rani floating in the river. All the six brothers went to bring her one after another but could not catch her. Finally, the youngest brother entered into the river. As he did so the Karam rani herself came to him and caught her respectively. Keeping her on his shoulder, all the brothers returned to their village. They planted the Karam branch in the courtyard and performed certain rituals to appease her. On the following morning, they immersed her in a nearby river with great honour. Thereafter the economic condition of that family went on improving.

Today, more than a century later, most tribals celebrate Karma festival believing that a branch of Karam tree brings a prosperity of the family. The message-by practicing and performing this Adivasi festival Karma puja on a regular basis-, planting, caring and nourishing trees -can remove two-thirds of all the emissions that have been pumped into the atmosphere by human activities. Right?