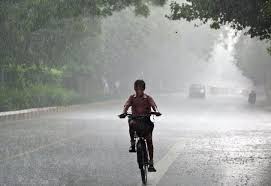 Though it is drizzling in parts of eastern India, the southwest monsoon has begun its retreat today. It marks the longest recorded delay in withdrawal of the four-month-long rainfall season.

However, this did not much adversely affect paddy in rain-dependent agriculture across the country. Without mentioning a word about monsoon and its effect on Kharif crops, the India Meteorological Department said that the beginning of monsoon withdrawal was evident in the atmosphere.

"In view of the persistence of an anti-cyclonic circulation in the lower tropospheric level over northwest India, gradual reduction in moisture in the lower and mid-tropospheric levels and reduction in rainfall, the southwest monsoon has withdrawn from some parts of Punjab, Haryana and north Rajasthan today (Wednesday), October 9, 2019 as against the normal date of September 1,"said IMD in a statement.

The record reveals that it is most delayed withdrawal in the past more than five decades as such a massive delay was recorded in 1961 (1st October 1961), followed by 30th September in 2007, the IMD added.